Laser-assisted refractive surgeries have been around for decades, and iLASIK is one of the many aiming to improve upon the traditional LASIK procedure.

The iLASIK procedure is designed to be low impact since it uses a femtosecond laser rather than a microkeratome blade to create the corneal flap. This means iLASIK is a good option for people who have high fluid pressure in their eyes, with or without glaucoma, and people who have thinner corneas.

Since iLASIK can make a thinner, more personalized corneal flap, you are at a lower risk of side effects involving flap detachment, infection, or scarring. As a result, iLASIK is more expensive per eye, and it can take a little longer in the operating room.

The iLASIK procedure is very similar to traditional LASIK as far as preparation and recovery. Johnson & Johnson reports that 94 percent of patients gain 20/20 vision or better after their eyes have fully healed. Patients are at risk of certain side effects associated with the procedure, including transient light sensitivity syndrome (TLSS), which is a problem unique to the IntraLase laser devices.

The best way to know if you would benefit from iLASIK is to talk with your optometrist or ophthalmologist.

The lasers necessary for laser-guided refractive eye surgeries were invented in the 1970s. With the development of the excimer laser, procedures like photorefractive keratectomy (PRK) and enhanced PRK allowed for clearer vision for some serious eye conditions, but were limited in use. Some eye surgeons wanted PRK to expand into the cosmetic surgery market, but this was rare.

In the 1990s, laser-assisted in situ keratomileusis (LASIK) was developed based on PRK. Then, the movement to improve refractive errors with laser surgery became popular worldwide.

Since it was approved by the United States Food and Drug Administration (FDA) in 1996, variations on this outpatient procedure have developed to reduce side effects and healing time. One of the more popular developments is bladeless LASIK, also called all-laser LASIK.

Johnson & Johnson created the iLASIK procedure to shape the cornea without using anything other than laser technologies. This makes their version of bladeless LASIK less invasive, which can improve healing time and reduce side effects for many people.

Who Benefits From iLASIK?

The iLASIK procedure and other types of bladeless LASIK use femtosecond lasers to create a small flap in the cornea, allowing the excimer laser to reshape the underlying tissue. Eye surgeons have found that using a laser, rather than a microkeratome, is slightly faster and less invasive. Although improvements to the microkeratome blade have made traditional LASIK a safe, low-impact procedure, iLASIK and other all-laser LASIK operations still typically have fewer complications.

Bladeless LASIK also allows for more people to choose refractive surgery. Traditional LASIK is often restricted to people who have thick-enough corneas. If you naturally have thin corneas, you are not a good candidate for LASIK. All-laser LASIK procedures allow for people with thinner corneas to gain clear vision. However, these procedures are still not for everyone.

Femtosecond laser technology allows for the flap in the cornea to be created very quickly and very minutely, which helps recovery time and reduces the time spent in the operating room. Other benefits include:

The Pros & Cons of iLASIK

Bladeless LASIK devices have been approved by the FDA since 1999. Many eye surgeons report that they are trained in and use both a microkeratome and a femtosecond laser, depending on what their patient needs.

Ophthalmologists report that they counsel potential patients on the pros and cons of both all-laser and traditional LASIK. Some surgeons prefer a microkeratome, while others prefer the femtosecond laser.

Some surgeons report that, while they will use either option to create a corneal flap, they have had more harmful side effects, like flap dislocation, when they used a microkeratome. For other surgeons, the femtosecond laser requires more suction on the eye and a few more seconds in the operating room, so they prefer the microkeratome for patient comfort and reduced side effects like dry eye.

The iLASIK procedure is a good option for more people. You might benefit from iLASIK if:

There are downsides to iLASIK, including: 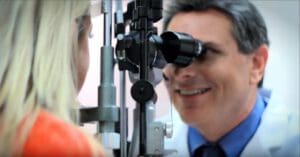 The iLASIK procedure was developed from traditional LASIK and follows a similar format.

Risks & Side Effects Associated With iLASIK

Like any surgical procedure, there are potential risks and side effects associated with iLASIK. This outpatient procedure is very low-impact, and you should recover much of your sight within one to two days of the operation.

You may experience some side effects for up to six months, including:

This does not impact your visual acuity, so your refractive error is still considered corrected. But TLSS can make you feel less satisfied with the iLASIK procedure since it is uncomfortable.

Eye doctors report that they could treat TLSS with an aggressive dose of steroids, and many instances were not bad, just mildly disruptive. However, some doctors reported that patients returned for follow-up appointments wearing a baseball cap and two pairs of sunglasses because their sensitivity to light was so intense. Although light sensitivity could occur in the first few days after iLASIK, TLSS is a syndrome that develops two to six weeks after the procedure.

After several reports, Johnson & Johnson found that the problem was associated specifically with early versions of the IntraLase device. Once the problem was identified, eye doctors began to diagnose and treat the condition more consistently. The manufacturer worked to reduce the risk with further generations of IntraLase.

The current risk of developing TLSS is less than 1 percent. Despite the low risk, it is important to go to all your follow-up appointments to be sure you do not develop this condition.

How to Decide if iLASIK Is Right for You

There are several individual factors that can make iLASIK a good option for you or that make traditional LASIK a better choice. Work with your optometrist or ophthalmologist to weigh the pros and cons, including specifics on costs, side effects, and recovery times.

Looking Back: The History of Laser Vision Correction. (July 2013). LASIK.

‘Blade Versus Bladeless’ LASIK Debate. (June 2016). All About Vision.