LASIK and LASEK are both laser eye corrective surgical procedures that help to treat nearsightedness, farsightedness, and astigmatism. Both use excimer lasers and work to reshape and ablate part of the cornea to correct vision.

LASIK is one of the most common refractive surgeries and one of the most successful. It has a short healing timeline, and you can almost be completely back to regular activities within a day or two. The U.S. Food and Drug Administration (FDA) publishes that the vast majority (over 95 percent) of people studied after a LASIK procedure reported satisfaction with their vision.

Not everyone is a candidate for LASIK, however, and LASEK is preferred in some cases. LASEK is a little more invasive but can be optimal for some people and may even be preferred by surgeons who are less experienced with LASIK.

LASIK involves creating a corneal flap with a femtosecond laser. With LASEK, the outer layer of the cornea is removed and then replaced; it will need a few days to regenerate following surgery. LASEK then be a good option for people who have thin corneas and not enough tissue to harvest to create the flap needed for LASIK.

In the end, both LASEK and LASIK can correct vision by reshaping the cornea in a similar fashion, and both can have positive outcomes. An assessment by your ophthalmologist can help you to determine which form of corrective eye surgery is right for you.

What Is the Difference Between LASIK and LASEK?

LASIK and LASEK are forms of corrective refractive eye surgeries, and both reshape corneas permanently. The main difference between them is that with LASIK, a corneal flap is created and replaced, and with LASEK, the top layer of the cornea is loosened, moved, and reattached. It will regenerate itself in about three to five days. Within that time, you are likely to experience some discomfort, and it will take a little longer for your vision to clear with LASEK than with LASIK.

After LASIK, the corneal flap will reseal itself within 24 hours, and vision can be clear within a few hours to a day. LASIK typically has a faster healing time than LASEK, and it is considered less invasive.

According to ABC News, the differences between LASIK and LASEK are fairly minor in that the end result is usually the same. Both can correct vision and have high success rates.

LASEK can be preferable if you have a thin cornea, however, as it does not need to harvest as much tissue as LASIK does. Initially, it was believed that LASEK surgery may be preferred for people who actively and regularly engage in contact sports and take blows to the head. This perception centered around the very small risk for a ruptured eyeball with LASIK related to the flap formation. Mayo Clinic reports that this risk is extremely rare even with LASIK procedures, making the apparent benefit of LASEK for that reason negligible.

Mayo Clinic further publishes that LASIK can be a better option for treating significant nearsightedness than LASEK. A detailed assessment and exam by your ophthalmologist and discussions with the surgeon performing the procedure can help to determine which option you may be the best candidate for.

The most common type of laser eye surgery is LASIK. Laser-assisted in-situ keratomileusis, more commonly known as LASIK, uses a femtosecond laser to cut away the top flap of the cornea and fold it back in order to access the stromal tissue at its core. The femtosecond laser creates gas bubbles to separate the corneal flap with precise and focused pulses, the American Academy of Ophthalmology explains. An excimer laser is then used to reshape the stroma through a process called photoablation. The flap is then replaced and typically will seal itself without the need for further medical intervention (like stitches) within a day or so.

You can typically return to most normal activities within 24 hours, and vision may even clear up within a few hours after surgery. The American Refractive Surgery Council reports that most people achieve nearly perfect vision after LASIK — around 90 percent experience 20/20 vision after a LASIK procedure.

LASEK, laser-assisted subepithelial keratectomy, is a form of PRK (photorefractive keratectomy) in which an excimer laser is used to make surface ablations on the cornea instead of creating a corneal flap. With LASEK, the outer layer of the cornea is loosened by using an ethanol, or diluted alcohol, solution. The tissue is then brushed away, and the laser is used to reshape the stroma underneath — similarly to LASIK. The same laser and technology are used in both procedures, but with PRK, the outer tissue of the cornea is often discarded instead of folded back and reattached.

LASEK combines both PRK and LASIK technologies. While the epithelial, or top layer, of the cornea is mostly removed, it is then replaced and repositioned after the ablation of the cornea during LASEK. The epithelial flap is much thinner with LASEK than LASIK, and it is kept attached at one corner of the eye, so it can be reattached after the laser procedure.

The outer layer of the cornea will regenerate in a few days, typically within three to five days. In the meantime, a special medicated contact lens bandage is used to protect the eye during healing.

The Federal Trade Commission publishes that since LASEK uses layers to create ablations on the epithelial of the cornea, it may then have fewer risks than LASIK surgery. In general though, both surgeries are considered to be fairly low-risk, and they both have many advantages that usually outweigh the potential side effects. 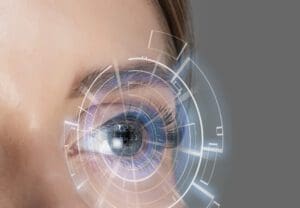 How to Choose Between LASIK and LASEK

LASIK and LASEK are very similar procedures that strive for the same result: corrected vision through the reshaping of the cornea using laser technology. Your ophthalmologist can help you decide which procedure may the best option for you.

Laser eye surgeons will do an assessment that can determine which form of refractive eye corrective surgery your eyes are best suited for. For example, if your corneas are thin, LASEK may be the better option, as the surgery does not require as much tissue as LASIK does since a flap is not being created. LASEK can also be optimal for significant myopia (nearsightedness) as this will require more of the central cornea to be removed and reshaped.

Doctors may have a preference between LASEK and LASIK depending on their expertise. LASEK is typically more invasive, but the cuts need to be less finite and precise, and surgeons may feel more comfortable with fewer LASIK flap-related complications.

It is vital to talk to both your ophthalmologist and your surgeon, and to know your options so you can make an informed decision on what will be the best choice.

Below, we’ve listed the pros and cons of each procedure to aid in the decision-making process.

Safety and Effectiveness of These Surgeries

Patients who undergo refractive surgeries, be it LASIK or LASEK, generally report better vision post-surgery. However, for most patients, choosing between LASIK and LASEK comes down to understanding the key differences between these two eye procedures. Both are considered safe and effective.

Even though they have a longer recovery period—surgeons will require the wearing of bandage contact lenses for up to five days after surgery—LASEK patients report better long-term vision results than people who have LASIK.

LASEK also decreases the risks of infection and chances of developing corneal haze after surgery.

LASEK procedures also eliminate the possibility of irregular flaps that can come with LASIK. As such, the corneal nerve sensation heals faster. Because corneal nerves play a major role in keeping the feedback mechanism that keeps the eye lubricated in check, there are fewer risks of dry eye, a common adverse effect from LASIK surgery.

You may prefer thin, irregular, or flat-shaped corneas from LASEK since LASIK involve making deep cuts into the corneal tissues.

Both LASEK and LASIK are great options for correcting vision, and both have high success rates. Experts in the field can help you to determine which procedure is best for you.

LASIK or LASEK Eye Surgery: What's the Difference and What's Best for Me? (September 2018). The Telegraph.

What Is the Difference Between LASEK and LASIK, and Is One Procedure Better Than the Other for Vision Correction? (August 2009). ABC News.