Uveitis: Causes, Symptoms, and How to Treat It Properly

Home » Conditions » Uveitis: Causes, Symptoms, and How to Treat It Properly

Uveitis is a term that covers several related inflammatory conditions that mainly affect the uvea, the part of the eye containing the iris, ciliary body, and choroid; however, uveitis can affect other parts of the eye too. (Learn More) There are several types of uveitis. It may clear up in weeks or months, or it can become chronic conditions. (Learn More)

There is not one underlying cause of uveitis. Instead, several autoimmune conditions, diseases, damage to the eye, eye infections, or cancer can trigger inflammation in the eye, along with the rest of the body, which may lead to uveitis among other symptoms. (Learn More)

It is important to get prompt diagnosis and treatment for uveitis to prevent the condition from progressing to other problems like cataracts, glaucoma, or vision loss. (Learn More) There are several medical treatments for uveitis, which focus on reducing inflammation and pain. It is rare that you would need surgery to treat uveitis, but there are surgical options along with prescription medications that can treat this eye condition. (Learn More) 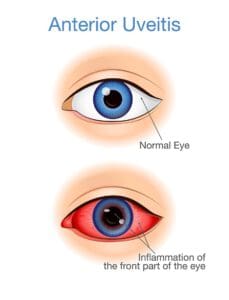 Uveitis is the term for a group of inflammatory eye diseases affecting the uvea, or the middle collection of organs in the eye. While many forms of uveitis have no specific underlying cause, inflammation can be triggered by infections, injury, the development of a different disease, or diseases that impact the immune system. Often, acute uveitis will clear up with treatment in a few weeks; however, chronic uveitis can lead to severe vision loss. In fact, in the developed world, uveitis is the fifth leading cause of blindness in adults.

Uveitis is not limited to the uvea, although it may begin there, and it becomes most apparent in these areas of the eye. The uvea encompasses these parts of the eye:

If uveitis spreads, it can affect the lens, retina, vitreous humor, and even the optic nerve. Sometimes, it can damage the cornea and sclera too.

Adults between 20 and 60 years old are the most likely to develop uveitis, but the condition has been found in children and older adults as well. The inflammatory condition may develop in one or both eyes. In the United States, about 200 out of every 10,000 people receive a new diagnosis of uveitis annually. Uveitis that recurs or does not go away is the riskiest form of this condition. It causes about 20 percent of legal blindness in the U.S.

While uveitis mainly affects the uvea, it can start or spread to other areas of the eye, eventually leading to blindness. There are several types of uveitis. The most often diagnosed versions include:

Aside from the areas of the eye that are inflamed, uveitis is also classified based on duration.

Causes and Symptoms of Uveitis 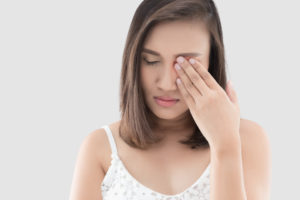 The primary cause of uveitis is inflammation in the eye, and it leads to various symptoms.

Inflammation has several potential causes. It is usually the body’s response to infections, tissue damage, toxins, or irritants. Swelling, redness, and warmth destroy the tissues targeted by white blood cells, and for the most part, the body’s response is important and effective. However, some conditions associated with the immune response can be harmful, and uveitis is an unfortunate side effect.

Some triggers of uveitis include:

Various diseases have been associated with an increased risk of uveitis.

Some types of cancer trigger inflammation in the body, which may lead to uveitis. Cancer in the eye can also cause uveitis as a side effect.

You may also be more genetically at risk of uveitis than others. This means you may struggle with recurring uveitis, and you require frequent vision checkups and treatment as a result.

The Risks if Uveitis Remains Untreated

Uveitis has caused blindness in thousands of people in the U.S. While the condition is more serious when left untreated, chronic uveitis may also progress into blindness after several years. Risks of uveitis include:

Diagnosis and Treatment of Uveitis 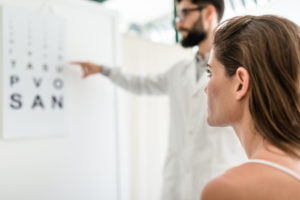 To receive a uveitis diagnosis, an optometrist or ophthalmologist will need to examine your eyes. You may also need to give a medical history, including any existing medical conditions and medications. If you have uveitis, it could indicate an underlying condition, so following a comprehensive eye exam with a visit to your general practitioner is wise.

An eye exam will include thorough examination of your eyes, along with:

Your optometrist or ophthalmologist will try to avoid more invasive tests, but you may also need further medical exams or tests like:

Based on the symptoms you experience, knowledge of any underlying conditions, and the results of tests, you may receive a uveitis diagnosis. If you have uveitis, your eye doctor will provide approaches to treatment that are primarily designed to reduce or eliminate inflammation. They also focus on alleviating pain, preventing tissue damage, and restoring as much lost vision as possible. The specific treatment you are prescribed will depend on what type of uveitis you have.

For example, anterior uveitis is treated with eye drops that dilate the pupil and prevent muscle spasms in the iris and ciliary body (called cycloplegics). You may also receive separate eye drops that contain a steroid like prednisone, which reduces inflammation, or you may receive a combined eye drop.

Intermediate, posterior, and panuveitis treatments may start with steroid eye drops, but they may also include injections in the eye, oral medications, or time-release capsules that are surgically implanted in the eye to manage chronic inflammation. If you are diagnosed with an autoimmune disease, you may take separate immunosuppressants that can alleviate some of your uveitis symptoms.

In some milder cases, you may take nonsteroidal anti-inflammatory drugs (NSAIDs) like ibuprofen or acetaminophen to reduce inflammation and pain, or you may take these over-the-counter medicines in combination with other prescription treatments.

In more intense or chronic, recurrent cases, you may undergo surgery. Damage to the physical structures of the eye, including chronic diseases like cataracts or glaucoma triggered by uveitis, may require surgical procedures to restore vision.  Another form of surgery you may need is a vitrectomy, which removes some of the vitreous gel from the middle of your eye, relieving pressure and removing some inflamed or infected tissue. Your ophthalmologist will let you know if or when this treatment is needed.

Uveitis: A Guide to Your Condition and Its Treatment. (December 2016). AbbVie.