How Is Z-LASIK Different From Normal LASIK?

Z-LASIK is a type of advanced LASIK that uses two lasers instead of a blade. It then uses a laser like traditional LASIK does.

This type of LASIK can be used for nearsightedness, astigmatism, and farsightedness. It works by reshaping the cornea.

The corneal flap creation process is what separates Z-LASIK and LASIK. The remainder of the procedure is the same.

There are different considerations for each of the different types of LASIK. Overall, both have very high success rates. 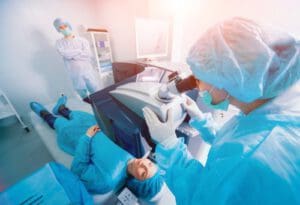 The procedure begins by the patient receiving a relaxing medication. People remain awake during this procedure, but they are relaxed to promote comfort. Eye drops are also applied to numb the area, so the person does not experience pain during this type of LASIK.

During normal LASIK, the doctor uses a microkeratome to create the corneal flap. This flap is created by cutting a portion of the cornea and folding it back so the doctor can easily access the eye structure that they need to reshape.

During Z-LASIK, the only difference is that the doctor uses a femtosecond laser to create this corneal flap instead of a microkeratome. The rest of the Z-LASIK procedure is just what someone would experience during a normal LASIK procedure.

The corneal flap looks like a hinge that the doctor folds back, so they have full access to the cornea.

Once the surgeon removes enough tissue to reshape the cornea, the procedure is complete. Exactly how the cornea is reshaped depends on the refractive error that is being corrected.

The surgeon has to flatten the cornea when they are working on someone with nearsightedness. They will create a steeper cornea when a person has farsightedness. When someone has astigmatism, the doctor aims to make the shape of the cornea more even. This is generally accomplished by smoothing the cornea’s abnormal shape.

The flap the doctor created is laid back into place after the procedure is complete. There are no bandages or stitches necessary. The cornea heals on its own.

People go home the same day they have Z-LASIK surgery. Following the procedure, they are kept in a recovery space for a short period of time. This allows health care staff to monitor them before they go home.

Once the person is able to be released, they go through a postoperative examination. As long as everything checks out, they are discharged.

It is important that people have a ride home following this surgical procedure. This is because the vision is affected, and the person usually receives a relaxing medicine that can affect reflexes.

Recovery is relatively smooth for most people. The risk of severe complications is low.

Though rare, it is possible to experience the following issues after any type of LASIK surgery:

When the corneal flap is made using the Z-LASIK method, there are the following considerations:

When the corneal flap is made using the normal LASIK method, the following considerations should be noted:

Comparing the Effectiveness Between Both LASIK Types

A few studies have been conducted comparing LASIK with a blade to the bladeless Z-LASIK type of the procedure. Most indicate that Z-LASIK may have at least a slight advantage over traditional LASIK.

For one study, researchers looked at various clinical results. They ultimately determined that Z-LASIK may be better than standard LASIK. This conclusion is the result of comparing the recovery of people who went through both types.

The best technique depends on the individual. However, there is evidence that shows that Z-LASIK may lead to slightly fewer complications and slightly improved visual quality.

Who is A Candidate for Z-Lasik?

Only a comprehensive eye exam can determine if Z-LASIK is safe and appropriate for you. Generally, you’re considered a candidate for the procedure if your ophthalmologist believes you have a high likelihood of success based on several factors, including your overall health, medical history, your dependence on prescription eyewear and the severity of refractive errors that you have.

What Should I Expect Before, During, and After Surgery? U.S. Food and Drug Administration.

A Look at LASIK Past, Present, and Future. American Academy of Ophthalmology.

Blade vs. Laser: Is There a Difference in Outcomes? Review of Ophthalmology.

How to Determine an Ideal LASIK Candidate. (April 2019). Optometry Times.

A Timeline for LASIK Surgery Recovery. (October 2021). All About Vision.