Cataracts are a condition in the lens of the eye that leads to slow loss of vision. (Learn more)

This may begin with changes in how you see color — most often, yellowing or darkening of the colors around you — as well as haziness or blurriness, double vision in one eye, and spots of lost vision. (Learn more)

Proteins in the lens of the eye begin to break down and clump together, usually due to age, but also due to disease or eye trauma. (Learn more) These cause cataracts. By 80 years old, over half of American adults have either developed cataracts or undergone cataract surgery. (Learn more)

This is a very treatable eye condition, and this article can help you learn more about what cataracts are, why they form, how you can slow their progress, and what surgical procedures and artificial lens options are available to help you see clearly again. (Learn more) There are also new treatments being developed, including special eye drops. Cataract surgery is outpatient, and the majority of people who undergo this procedure recover most of their vision within months.

What Is a Cataract?

A cataract is a change in the lens of the eye leading to cloudy spots or an opaque lens. This is a progressive condition that can take years to obstruct vision, but if left untreated, cataracts can lead to blindness.

In the case of cataracts, proteins in the lens are damaged, leading to clumps that eventually obstruct vision. While the condition is painless, it can be frustrating as it develops, and it can eventually be debilitating.

Millions of people develop cataracts, typically starting after age 40, with most developing around age 55. By 80 years old, around half of American adults either have cataracts or have had cataract surgery. Cataracts will develop in both eyes, but one will typically get worse than the other and need more immediate attention.

For the most part, it takes years for cataracts to reach a point that they require medical treatment. Most optometrists and ophthalmologists will monitor the progress of a cataract in annual exams unless vision suddenly and rapidly changes. There are some lifestyle changes you can make to slow down the cataract’s progress, but ultimately, all cataracts will need surgery.

Fortunately, cataract surgery has a high success rate, and with a little time to heal and adjust, most people regain vision enough to go about their daily lives without intrusion. About 22.3 million Americans have cataracts at some point, making it one of the most common eye conditions in the country.

There are a few symptoms of cataracts, which may initially seem like a different vision problem, but can be appropriately diagnosed by an optometrist or ophthalmologist. These symptoms include:

If you have had a refractive error like myopia (nearsightedness), you may experience a sudden improvement in vision, followed by a worsening of vision. You may even be able to see the cataract in your eye, behind your pupil. It may appear like a milky white or yellowish spot.

Most cataracts are age-related, so it may be difficult to tell if you are developing a cataract or if your vision is changing in other ways due to age. Even after you have received a cataract diagnosis, your optometrist may simply strengthen the prescription for your glasses or have you wear different kinds of corrective wear until other symptoms of the cataract become too difficult to manage. Your optometrist may recommend wearing glasses with an antiglare coating, especially for night vision. 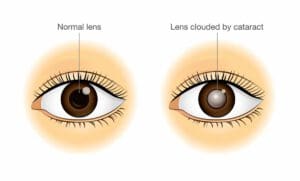 All cataracts occur because of damaged proteins in the lens clumping together and obstructing vision; however, there are several kinds of cataracts that lead to different symptoms, have different root causes, and will look different in the eye.

There are several different causes of cataracts, including: 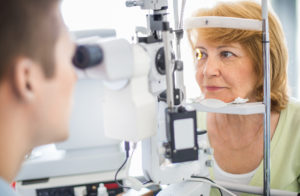 How Are Cataracts Diagnosed?

There are several factors influencing whether or not you are at risk of developing cataracts.

When you experience changes in your vision and you go for an eye exam, your optometrist will run a series of tests and ask you several questions to understand more abut your condition. Some of the diagnostics will include:

Typically, your optometrist will notice the cataract during a routine exam, or your vision will change enough that you will need to see an optometrist for a diagnosis before your vision is severely impaired by the cataract. Most eye doctors will monitor the progress of the cataract before it becomes a very serious issue, so they will not immediately send you into surgery to replace the lens, but eventually, you will need to have your biological lens replaced with an artificial lens, called an intraocular lens (IOL).

Monitoring the progress of the cataract is the main approach to treatment until surgery is needed. Your eye doctor will change your glasses and contact lenses prescription to improve blurry vision and associated refraction errors as much as possible until your vision has become too obscured by the cataract. In some cases, you may receive special eye drops to widen the pupil, allowing more light through. These are mainly prescribed to young children to prevent extensive vision loss until they can undergo surgery.

If you receive a cataract diagnosis, you should speak with your eye doctor right away about surgery prospects and the process of monitoring your cataract’s development. Each person’s timeline is different, and your doctor can inform you about the next steps.

Changes in Lifestyle to Slow Down Cataract Growth

Once a cataract forms, it will progress until vision is seriously impaired. However, there are a few steps you can take to slow down the progress of a cataract after it begins. Lifestyle changes include the following:

Medical professionals have identified several nutrients that may improve vision and reduce the risk of cataracts, including vitamin C, vitamin E, zinc, zeaxanthin, and lutein.

Eye surgeons typically remove cataracts from one eye at a time. If you have cataracts in both eyes that require surgery, your ophthalmologist will remove one, allow your eye to heal, and then remove the other.

There are side effects associated with cataract surgery, as there are for any surgical procedure. There is a minor risk of retinal detachment, for example. You may develop an infection or bleeding that does not stop. You may also develop a secondary cataract or otherwise experience vision loss.

These side effects are very rare, and medical professionals are investigating methods for improving surgical outcomes. The majority of people who undergo cataract surgery, most often after age 60, usually regain most of their vision and, with a little help from prescription glasses, can perform all kinds of normal tasks like reading, driving, typing on a computer, and enjoying long walks. About 90 percent of people who undergo cataract surgery report improved vision, making this outpatient procedure one of the safest and most effective surgeries in the United States.

Recovery time after this outpatient surgery may be several weeks, up to a few months. The estimated recovery time is about eight weeks, but if you have additional complications, this process may take longer. Again, speak with your eye doctor about expected timeline, post-surgery follow-up exams, and other means of measuring your healing and vision progress.

The most common IOL implanted — because it is covered by health insurance — is the monofocal IOL. It may be made of silicon or acrylic material. This artificial lens does not focus well on different distances, so you will likely need contact lenses or glasses after your cataract surgery, so you can perform tasks close to your face and see distances clearly.

There are other types of lenses you may opt for, although you may be charged out of pocket for the cost.

Each of these lenses may be covered in part by health insurance, but the full cost is not likely to be covered unless there is a distinct medical need. If you are interested in these lenses, and your eye doctor has not recommended them for you, ask about the difference in cost and any difference in post-surgery outcome.

Development of a secondary cataract is the most common side effect of cataract surgery. This is sometimes referred to as an after-cataract, and the medical term is posterior capsular opacification (PCO). This may develop months or years after cataract surgery, and it typically develops because not all of the diseased lens was removed in the original procedure. This leads to a portion of lens cells settling onto the back of the lens capsule and forming another cataract.

Symptoms of a secondary cataract mimic the first cataract, mostly with discolored, hazy, or blurry vision. This condition may develop weeks, months, or years after the cataract procedure, and it is the most common side effect associated with cataract surgery. Fortunately, it is very treatable.

While the first cataract surgery involves removing the lens, secondary cataract surgery is simpler. A procedure called YAG laser capsulotomy uses a laser to make a small hole in the capsule itself, allowing light to filter through your artificial lens, the new tiny hole, and onto the retina, clearing up vision. For some people who have multiple complicating conditions, this procedure may need to be performed several times over the years, but this is extremely rare. 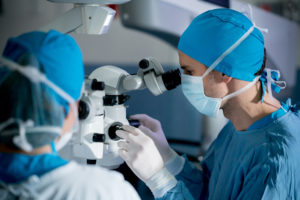 Medical researchers are continually working to improve treatments for eye conditions, including cataracts. While the surgery for this condition is largely successful and safe, having access to less invasive treatment is a better option.

One potential is a type of eye drop that may slow the growth of cataracts. One research study into a chemical called Compound 29 found that it reversed age-related and hereditary cataracts in mice and in human lens tissue that had been removed during cataract surgery. However, there have not been further extensive studies on the eye drops.

For now, cataracts remain a very common, and fortunately very treatable, condition of the eyes.

Could Eye Drops Be an Alternative Treatment to Cataract Surgery? (December 4, 2015). American Academy of Ophthalmology (AAO).