LASIK Success Rates: How Safe Is Eye Surgery In 2022? 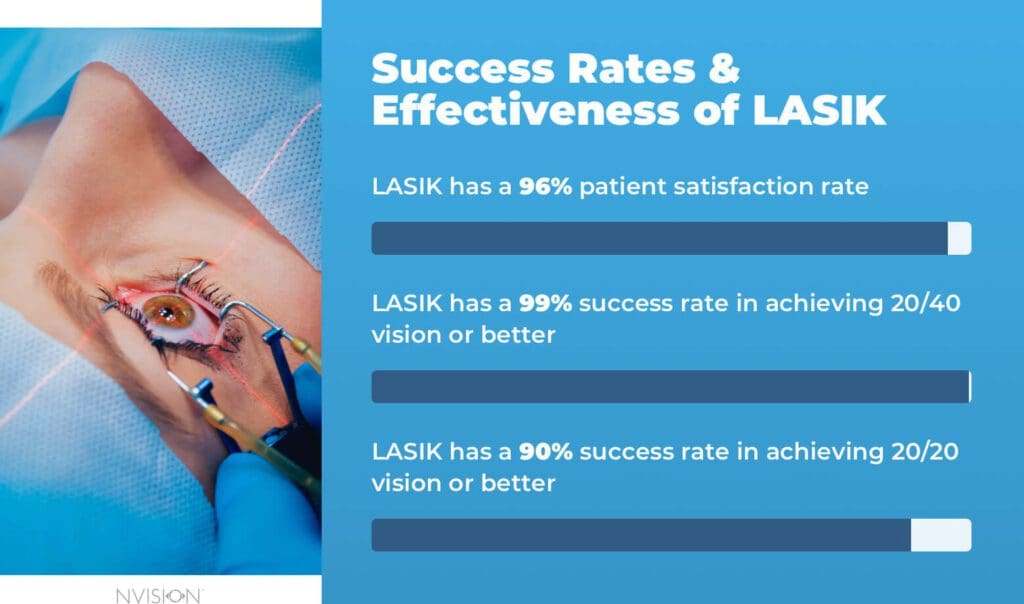 LASIK is a safe refractive procedure that is approved by the FDA in a wide number of use cases. It is widely considered a very safe eye surgery in 2022.

If you choose a reputable facility and have the surgery performed by a trained, competent surgeon, your risk of serious long-term complications is very low. The surgery also has a very high rate of patient satisfaction.

Research suggests that the average success rate of achieving 20/20 vision is 90%. However, this figure includes surgeries from outdated technologies and inexperienced surgeons.

Advanced LASIK surgery providers, like NVISION, often have success rates of 99% in achieving 20/20 vision. Some providers can even achieve 20/15 more than 90% of the time.

LASIK (laser-assisted in situ keratomileusis) is considered a safe form of refractive eye surgery. Long-term complications, where a person struggles with problems resulting from their surgery for years or the rest of their life, are rare.

For example, there are no confirmed reported cases of blindness caused by LASIK. It is theoretically possible, as the procedure does involve cutting into the eye and can expose the sensitive organ to a number of known dangers, but there are no official reports of this happening.

The Impact of the Surgeon & Practice

As is true of any surgery, your surgeon and the facility where you get your procedure done can dramatically impact your overall results.

The FDA has approved LASIK, but they also note that they lack the authority to implement certain systems some have called for, including these: 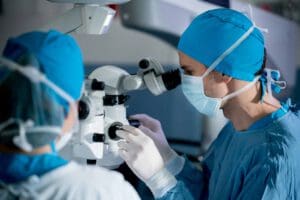 As long as a surgeon follows the law, the FDA cannot necessarily ensure the quality of their care. While surgery is regulated and a doctor can be sued for negligence, it is still very important to perform your own research when choosing where you receive care. Your surgeon’s expertise will be one of the most determining factors in the success of the procedure.

The FDA recommends these tips for finding the right practice and surgeon:

Experts suggest less than 1 percent of people who undergo LASIK experience serious surgical complications, such as infection or dislocation of the corneal flap that is cut during the procedure. The rate of less serious long-term eye and vision complications caused by the procedure is likely higher, but still low. These symptoms could include things like light sensitivity or eye dryness.

Over 96 percent of people are satisfied with the results of their LASIK surgery, which is an extremely high rate of patient satisfaction. Of those roughly 4 percent who were not satisfied, the surgery is not necessarily considered a failure.

Exact statistics on long-term complications of LASIK are unavailable. The procedure hasn’t been around long enough for a significant pool of long-term data to be gathered. The first laser for LASIK eye surgery was approved in 1998. 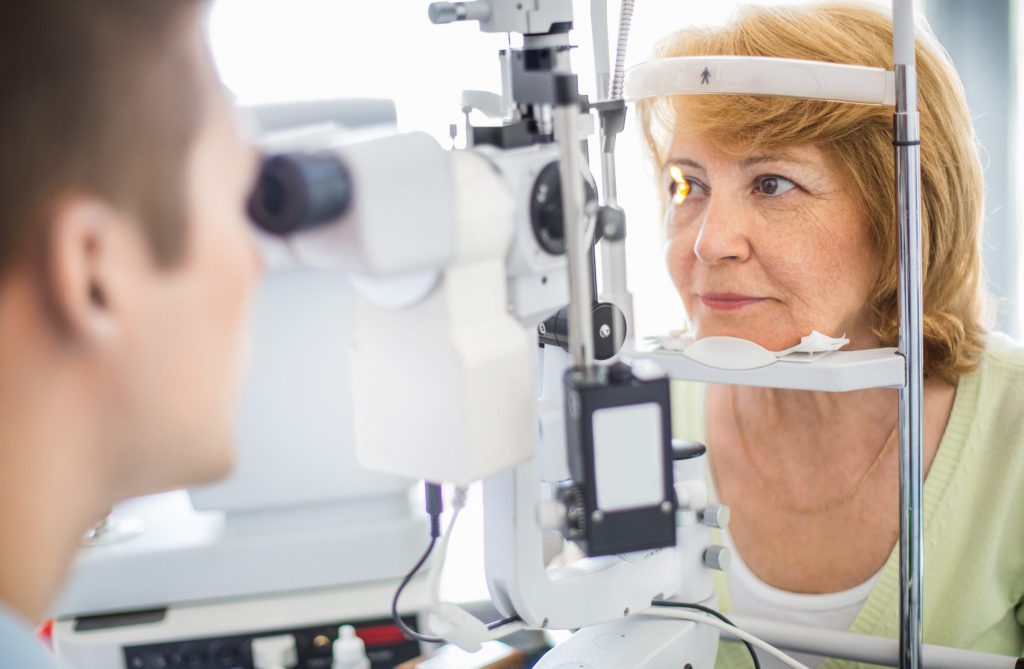 The core concept behind LASIK, that the cornea might be sculpted to change its curvature, is believed to have been the idea of José Ignacio Barraquer Moner, who came up with it in 1948. In the 1960s, he performed an early version of the procedure using a manually driven microkeratome (a bladed surgical tool) and an early computer.

Over time, he invented a number of techniques and instruments to help with the procedure. Around this same period, a number of other notable experts made important contributions, including these individuals:

As is true with most medical innovations, no single individual is responsible for the development of LASIK. Many doctors and scientists directly and indirectly innovated in ways that allowed for modern LASIK surgery to become possible.

In the 1970s, Nikolay Basov, a Soviet Nobelist, played a critical part in the development of what would become modern surgical lasers. Soon after his work came to fruition, laser eye surgery techniques were developed.

In the 1990s, Greek physician Ioannis Pallikaris would develop and write about techniques that he would eventually publish and give the modern LASIK moniker. The American FDA would formally approve the surgery in 1999.

More recently, technology has allowed for LASIK to be better customized to a patient’s eye. For example, doctors can build topographical maps of the eye so they better know how to cut to a patient’s unique features. Variable heads, ring sizes, and hinge positions on microkeratomes have allowed for surgery to become safer for patients and easier for a surgeon.

These advancements have all helped to make LASIK safer than ever before in 2022.

What Are the Risks and How Can I Find the Right Doctor for Me? (August 2018). U.S. Food and Drug Administration.

Predictive Factors for Efficacy and Safety in Refractive Surgery for Myopia. (December 2018). PLOS ONE.