LASIK is the most famous and requested refractive error surgery, but it has only been around since the 1990s. Radial keratotomy helped some people with myopia in the 1980s, and in rare cases, this procedure may be recommended today.

Although radial keratotomy was a huge advancement in treating myopia at the time, LASIK is safer, faster, less expensive, less invasive, and has a much higher rate of success compared to RK, making it a better choice for most people.

When asking your optometrist or ophthalmologist about outpatient surgical options to treat your refractive error, chances are high they will recommend LASIK. Even though RK is considered a dated procedure and rarely recommended, you can still ask about radial keratotomy if you think it will work better for your nearsightedness. 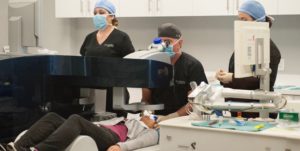 When you think about surgery that improves your vision by managing your refractive error, your first thought is probably about laser-assisted in situ keratomileusis (LASIK). This is a famous outpatient surgery involving a laser that reshapes your cornea, so light is refracted to the back of your eye. This improves the clarity of your vision, whether you are nearsighted, farsighted, or have astigmatism.

Although LASIK is the most famous version of this procedure, medical researchers have developed several methods for reshaping the cornea over the past several decades. One of the original procedures was radial keratotomy (RK), which was designed to help people with myopia, or nearsightedness, ranging from -1.00 to -4.00 diopters.

Today, RK is considered an obsolete procedure. It is unlikely that your optometrist or ophthalmologist will recommend it. Despite this, there are some situations in which you may benefit from this operation.

All types of surgeries have risks of side effects and complications. Evidence over many years shows LASIK as a highly safe procedure with low complication rates. In fact, it is among the most studied and safest elective surgical procedures eye surgeons can perform today. Clinical data indicates that over 96 percent of patients report satisfaction with their results.

Potential side effects are mild. They include dry eyes, glares, haloes and double vision that usually resolve within three to 12 months. Rare potential complications include astigmatism, corneal inflammation, overcorrection and under correction.

Statistics show Radial Keratotomy as less safe than LASIK, a chief reason why eye surgeons today are unlikely to recommend it. Although radial keratotomy helped improve the vision of most patients who underwent the procedure, it is more invasive and not as precise as LASIK. As such, it carries a higher risk of side effects and serious complications.

To be fair, some of these complications develop years after patients undergo the procedure. Also, subsequent eye surgeries are more challenging to perform on patients who have undergone radial keratotomy. Needed follow-up procedures are not usually an issue for people who undergo LASIK surgery.

Most people see clearly after 24 hours. Some patients can take two to five days for immediate recovery. However, it can take up to six months for your vision to fully stabilize following LASIK.

The recovery time of radial keratotomy also varies from patient to patient. Recovery is usually quick but not as fast as recovery following LASIK. Patients have to wear an eye patch after the procedure.

Will Your Eye Doctor Recommend Radial Keratotomy vs. LASIK?

When you talk to your eye doctor about refractive surgery, they will discuss one of the versions of LASIK — bladed versus bladeless LASIK, for example. They are unlikely to bring up radial keratotomy since there are better procedures and more recent devices that allow for faster, less invasive refractive improvements.

Radial keratotomy was an important step in refractive surgeries, allowing for advancements in the field that led us to where we are today. Some eye doctors will use it today in specific circumstances.

LASIK is typically about $2,000 to $3,000 per eye, and you might get some insurance coverage depending on where you go and how comprehensive your vision insurance is. It is unlikely that you will get insurance coverage for radial keratotomy since there are more efficient, inexpensive, and less invasive refractive operations to choose from. Since you are unlikely to undergo RK, there is little financial information available on this procedure anymore.

Many people who wanted to reduce their myopia underwent radial keratotomy in the 1980s. Unfortunately, even though their corneas are considered healthy, they are not good candidates for LASIK now.

The surface changes from the RK incisions mean that it is harder for an eye surgeon to create a corneal flap. Even if your cornea is a standard thickness, you may not qualify for LASIK if you underwent RK a few decades prior.

Can I Have LASIK After Having Radial Keratotomy? (August 2014). American Academy of Ophthalmology (AAO).

Is Lasik Safe? What You Need to Know. (October 2021). Refractive Surgery Council.

Meeting the Challenge of Post-RK Patients. (October 2007). Review of Ophthalmology.