Can Your Eyes Be an Early Indicator for Alzheimer’s?

Home » Vision Education » Can Your Eyes Be an Early Indicator for Alzheimer’s?

Alzheimer’s disease is an irreversible, progressive form of dementia, where patients gradually lose their memories and cognitive functions. (Learn More) Because of the connection from the brain to the eyes via the optic nerve, it is speculated that specific eye exams can indicate the likelihood of a person with a family history of Alzheimer’s developing the condition, even years before the first symptoms start to show. (Learn More)

While Alzheimer’s disease has no cure, it is believed that early detection can help patients better prepare for the onset of the condition. Regular eye exams can aid with early detection. (Learn More)

What Is Alzheimer’s Disease? 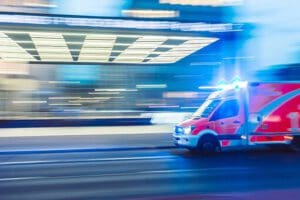 Alzheimer’s disease is a form of dementia, an umbrella term to refer to a group of diseases and conditions that cause a loss of memory, language, problem-solving, and cognitive skills, that slowly rob a person of their ability to perform everyday functions, including eating and speaking.

Alzheimer’s disease is believed to be caused by the buildup of protein plaques in the brain. These plaques damage and kill nerve cells (neurons) in the brain, which is one reason why memories and thinking functions break down with the progression of the condition.

In 2019, the American Academy of Ophthalmology wrote that both neurologists and ophthalmologists are very interested in the connection between eye tissue and brain tissue. The brain is directly connected to both eyes via the optic nerve. Whatever the eyes see is transmitted immediately to the brain for processing.

Therefore, a disease or condition of the brain can influence the eyes. Not only does the optic nerve directly connect the eyes to the brain, it is brain tissue that extends beyond the brain. Similarly, the retina is part of the eye, but it is also an extension of brain tissue. This connection is the reason that Alzheimer’s disease, which is caused by damage to the brain cells, has an effect on the retina.

Can Your Eyes Be an Early Indicator for Alzheimer’s?

Currently, a person can be diagnosed with Alzheimer’s disease after a series of tests to eliminate other causes of their memory loss, mobility difficulties, and personality changes. These tests can include physical exams, cognitive evaluations, and brain imaging scans.

However, none of these methods actually diagnose Alzheimer’s disease. As of now, the only guaranteed way to confirm the development of Alzheimer’s in a patient is examining their brain tissue after they die.

But because of the deep connection between brain tissue and eye tissue, neurologists and ophthalmologists have been looking at using this connection to diagnose Alzheimer’s disease and other forms of dementia. Past research has shown that eye exams can raise warning flags for the risk factors of diabetes, strokes, high blood pressure, cardiovascular diseases, STDs, and leukemia.

Some studies have found that people with Alzheimer’s disease will have distinctly different retinas compared to people of similar ages and gender without the condition. These differences can be detected with an optical coherence tomography test, which shows changes to the layers of the retina (specifically, the presence of certain kinds of proteins) and the blood flow inside the eye.

Another technique, known as a fluorescence lifetime imaging ophthalmoscopy, measures the buildup of the kind of protein that causes deterioration of the nerve endings in the brain, which is characteristic of Alzheimer’s disease.

A 2019 study out of Duke University Medical Center explained that in the brains of people who don’t have Alzheimer’s disease, there is a “dense web” of blood vessels in the back of the eye, inside the retina. In people who do have Alzheimer’s, the web was notably less dense, even empty.

Regular eye exams cannot pick up this difference, but the methods mentioned earlier (as well as another one, known as optical coherence tomography angiography) can. This might be the key for whether a patient’s eyes can truly be an early indicator for Alzheimer’s disease.

The study’s senior author told Science Daily that the changes in the density of the retina’s blood vessels “could mirror what’s going on in the tiny blood vessels in the brain.” These changes might manifest before any of the typical cognitive symptoms of Alzheimer’s start presenting.

The aim of these studies would be to develop technology that can detect Alzheimer’s early, before the memory loss and unpredictable behavior take hold. While there is no cure for Alzheimer’s disease, early detection can allow for necessary treatments and lifestyle changes to minimize the disruptive effects of the symptoms. 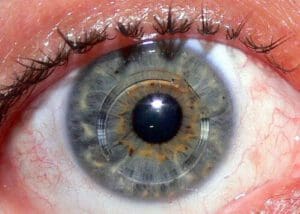 Another 2019 study, this one from the University of California San Diego, noted that since Alzheimer’s disease can begin the alteration of brain even decades before the first symptoms start to show themselves, conducting eye exams in people with a family history of the condition might reveal the likelihood of them developing Alzheimer’s well in advance. This means they can begin to prepare for the potential onset of the disease and take measures to mitigate its severity.

The researchers behind the study suggested that the speed at which a patient’s pupil dilates is possibly an affordable, low-invasive method (compared to the tests mentioned earlier) that might help people who have a genetic risk of Alzheimer’s disease. They looked at the locus coeruleus (LC), a group of nerve endings in the brainstem that control some cognitive functions. Some of the protein plaques that are associated with Alzheimer’s disease first appear in the LC, and it is the LC that drives the changing diameter of the pupils of the eye (also known as the pupillary response) during cognitive tasks (a normal process known as task-involved pupillary response).

Generally speaking, the more intensive the concentration, the bigger the pupils dilate. This is the brain’s way of trying to absorb as much information as possible by making the eyes as large as possible.

The research out of UCSD is the first to link pupillary dilation responses in patients who have an identified genetic risk for the development of Alzheimer’s disease. The lead author of the study suggested that testing the pupillary response during cognition tasks “could be another screening tool” that would help doctors evaluate the risk of Alzheimer’s disease before symptoms start to appear.

Research is ongoing in this area, so it’s likely that we’ll learn more about the connection between the eyes and Alzheimer’s disease in the years to come.

What Is Alzheimer’s Disease? (May 2017). National Institute on Aging.

Alzheimer’s Disease, Dementia and the Eye. (May 2019). American Academy of Ophthalmology.

Is There a Test for Alzheimer's Disease? (September 2019). Harvard Medical School.

Could an Eye Doctor Diagnose Alzheimer’s Before You Have Symptoms? (March 2019). Science Daily.

How the Eyes Might Be Windows to the Risk of Alzheimer’s Disease? (September 2019). Science Daily.

Genetic Mutations That May Protect Against Alzheimer’s Discovered by Scientists. (February 2020). Yahoo! News.

Dementia Care: The Sign in Your Eyes That Could Signal the Brain Condition. (January 2020). Express.