How Do Blind People Experience Their Dreams?

Home » Vision Education » How Do Blind People Experience Their Dreams?

When you think back to one of your dreams, you probably remember some visual aspects. Perhaps you remember seeing a loved one’s face or maybe you dreamt about flying across rooftops, enjoying some amazing scenery. This is because our dreams are predominantly visual1, and out of all of our senses we experience when dreaming, our sight tends to be the strongest.

But what if you can’t see in the first place? How do you experience dreams then? To help answer this question, we asked five blind or severely sight impaired people about how they experience dreams and brought them to life through images. 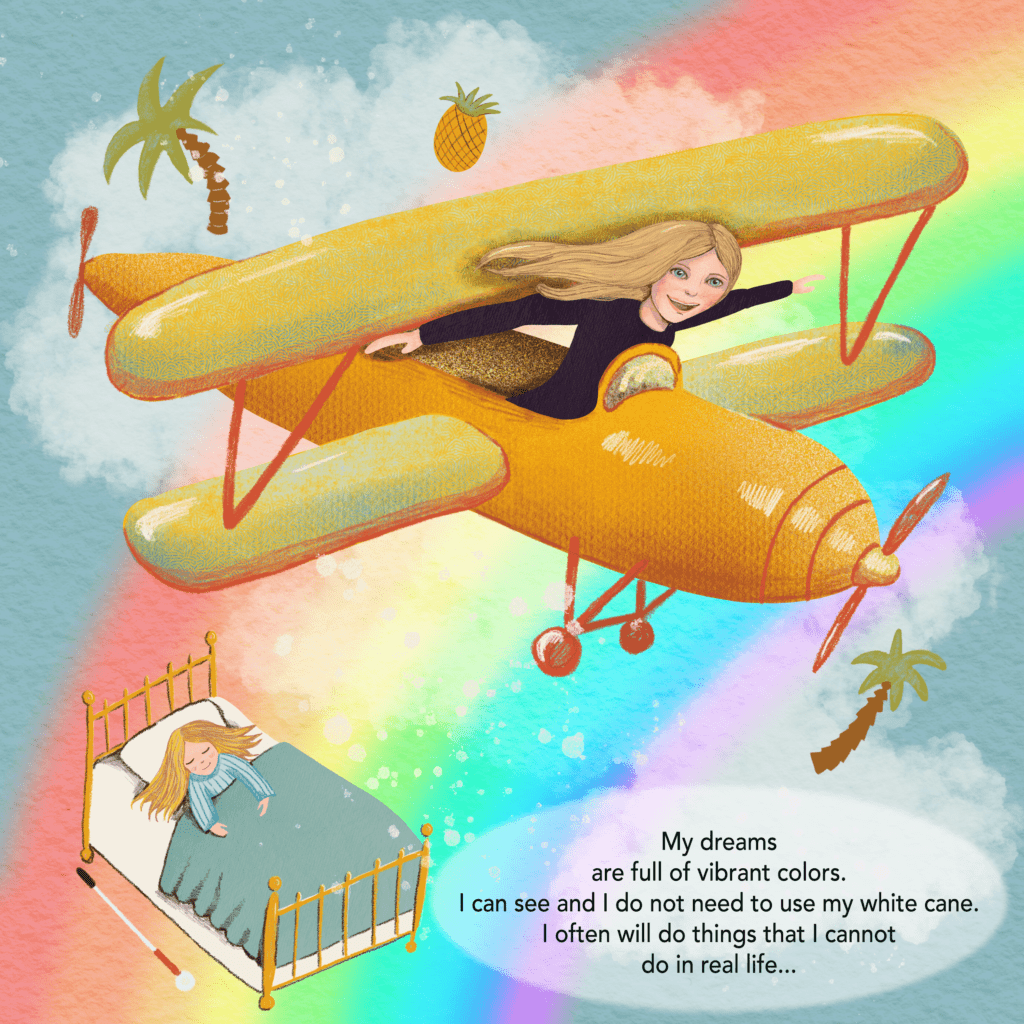 Claire, who lives in the UK with her family, was registered as blind in 2017 after suffering a series of strokes that gradually caused her to lose vision.

Although Claire spent most of her life as a sighted person, she says that she has started to forget what things look like.

“People who go blind usually lose their visual memory after seven years and there are many things of which I have already started to forget what they look like.”

Claire says she experiences very lucid dreams, and that she always remembers them when she wakes up: “My dreams are full of rainbow colors, bright and multicolored. I often dream of going on holiday, being in happy places.”

In Claire’s dreams, her visual impairment is gone: “In my dreams, I can always see, I never have to use my white cane. […] I often do activities that I cannot do in real life such as driving a car or flying a plane.”

For Claire, the dream world is a very happy place: “My dreams usually make me feel happy and I love dreaming.” 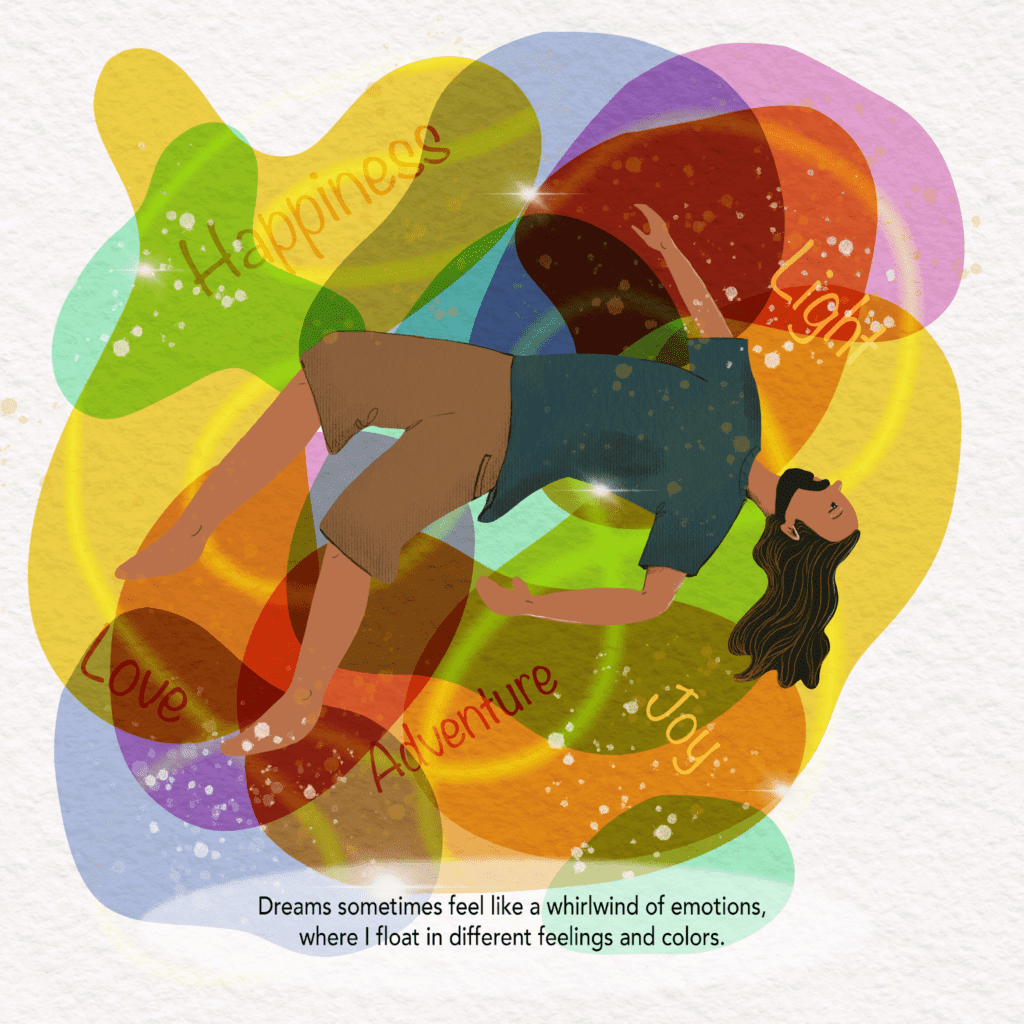 Anthony was born with Leber Congenital Amaurosis (LCA), a rare condition that can cause blindness from a very young age.

Now a Paralympic athlete in surf, judo, wrestling and skating for the U.S., Anthony has been featured in a documentary on Amazon Prime called “A Shot in the Dark.”

Anthony wasn’t born blind, so he has memories from when he was little and says he’s got an idea of what the world looks like. His dreams tend to be “just like real life but more intense.”. He continues and says “I can see in my dreams. It feels as if I see perfectly sometimes. Things are so bright and vivid.”

His dreams are often full of emotions and he says he sometimes “feel like a whirlwind of emotions, where I am floating in different feelings and colors.”

At times, Anthony dreams about his brother who passed away: “They are my favorite dreams. He always wears his sunglasses and we travel to places we have never been before. Sometimes my dreams are hard to wake up from.” 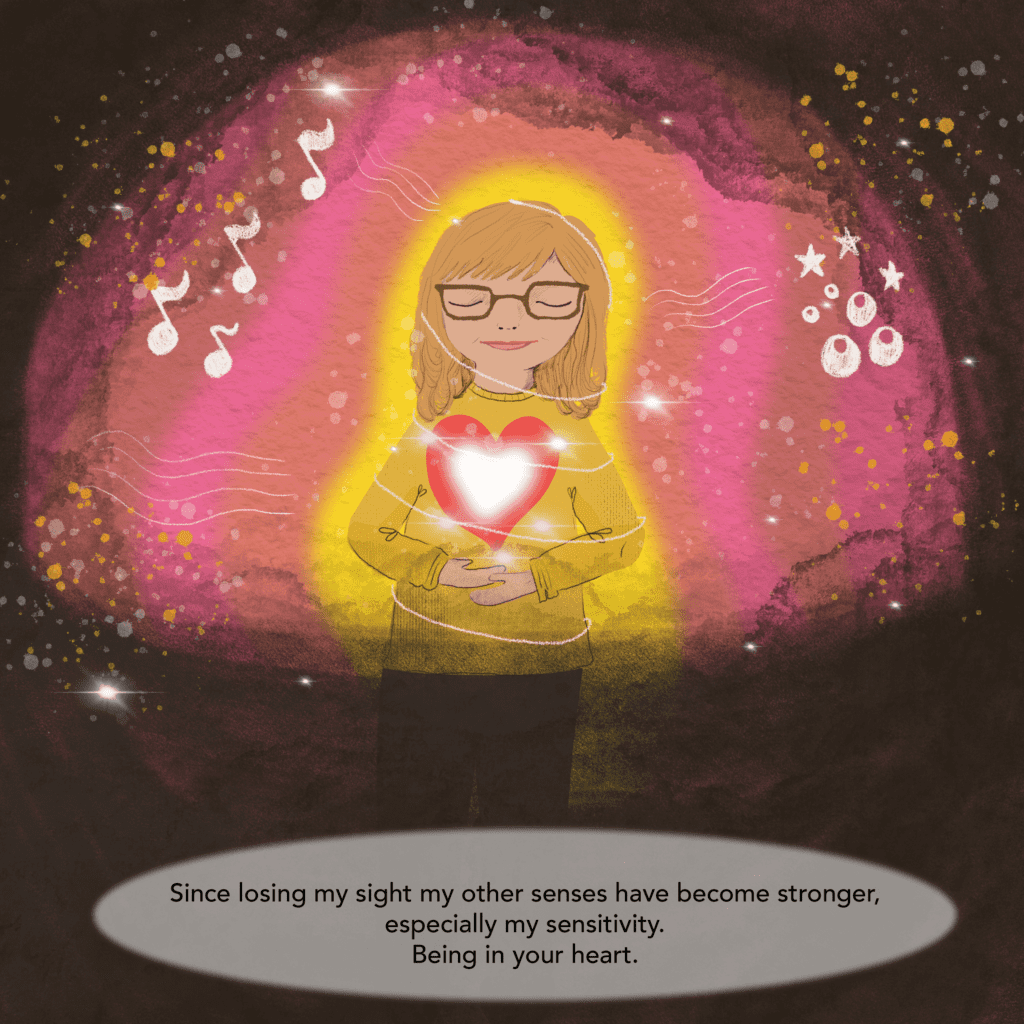 About 33 years ago, when Mary Kathryn was 13 years old, she was diagnosed with the hereditary condition Retinitis Pigmentosa (RP). The condition, which affects the retina and is caused by a loss of oxygen behind the eye, started as severe night blindness and progressed into tunnel vision. Mary Kathryn’s condition continued to deteriorate over time, and today, she is legally blind with 11% peripheral vision left in her left eye and 13% peripheral vision in her right eye.

Other than that sixth sense Mary Kathryn experiences, she says that she also experiences other senses in her dream such as smell, sound and also sight. In her dreams, she is not usually blind, and she never uses her cane. 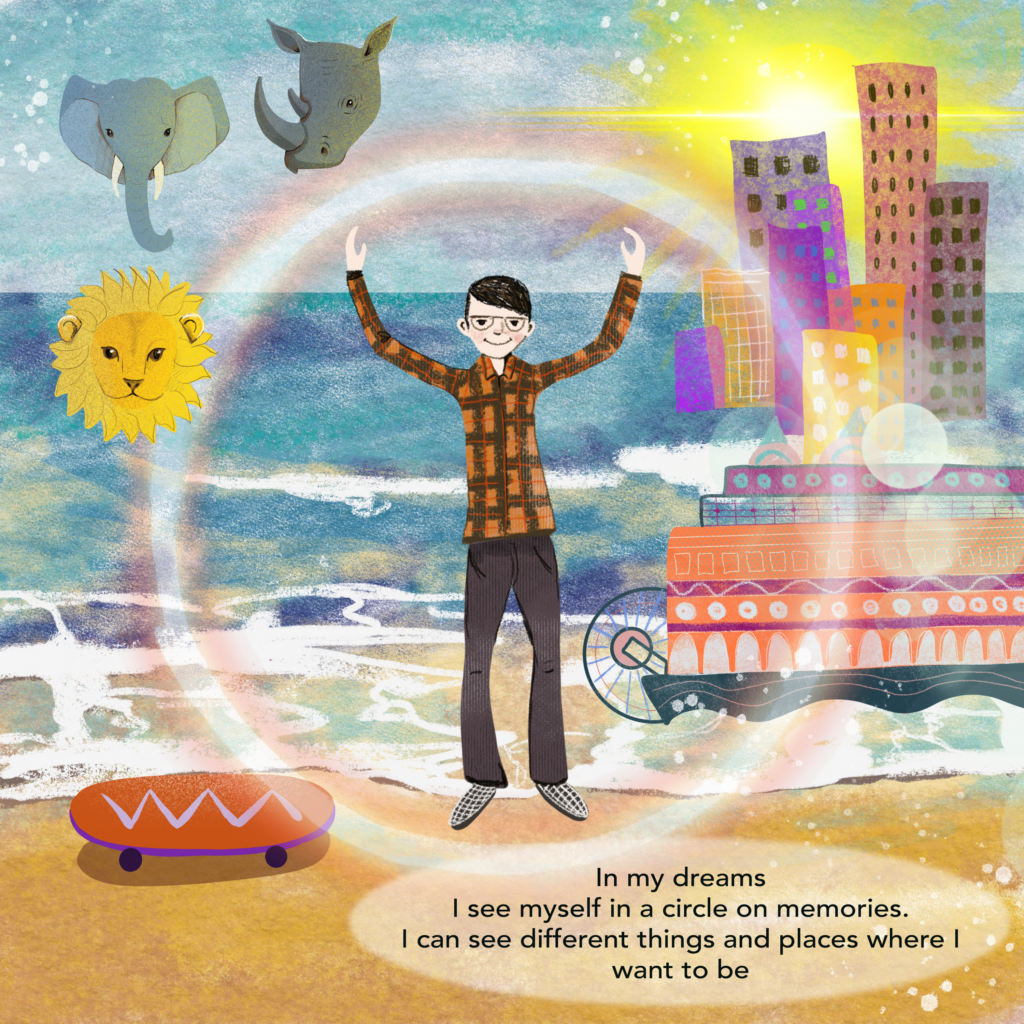 Ashton has been blind since he was born. He has been diagnosed with a rare condition called septo-optic dysplasia, which causes underdeveloped optic nerves. He was interviewed alongside his mother Hilda.

When Ashton dreams he uses all his senses, and mentions that when he dreams about warm water, he feels a lot of heat.

When he dreams he always sees his memories: “It looks as if I am in a circle of memories. I can see different things and places where I want to be. I like to dream about going places. I like to go to the ocean, to skateparks. I like to make cool videos and I often dream of being a writer.”

Ashton thinks his blindness gives him a different dream experience: “I think dreaming for me is different from how it is for other people because I can see a lot of things that other kids cannot see. I notice things in my dreams that sighted people may not notice.” 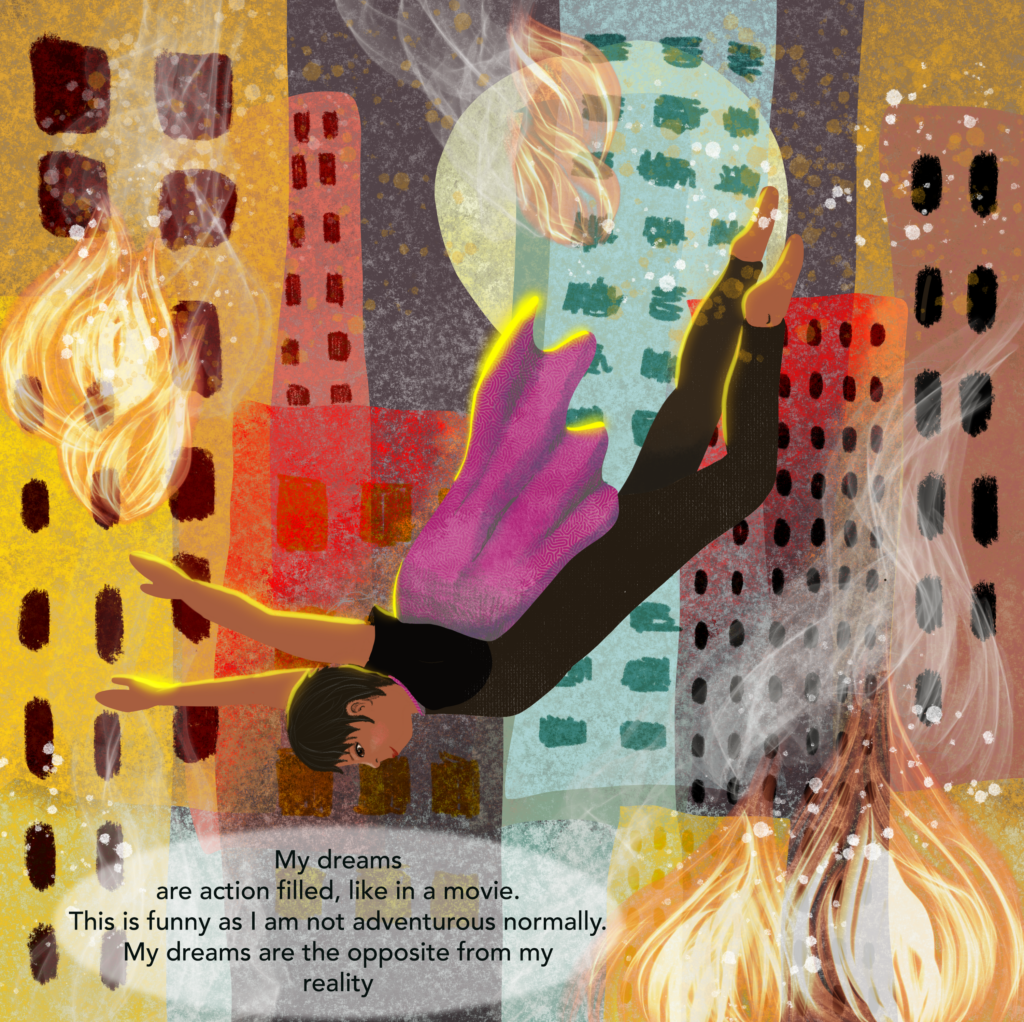 As a child Steph had high myopia (a rare type of extreme nearsightedness) but she did not realize she couldn’t see properly until she tried glasses for the first time.

“I will never forget that moment. My world changed in an instant. It was as if the world suddenly changed. Everything was brighter and all my senses were heightened.”

Steph thought that that was it and that she could live with glasses for the rest of her life, but when she reached her 40s, she suddenly lost sight in one of her eyes, and some time after, her other eye got affected too. After numerous operations and attempts to save her vision, Steph was declared legally blind.

When it comes to her dreams, she says one word in particular comes to mind: “vivid”.

She says that “In my dreams I can see perfectly and I can do lots of things. I never have to use my cane. I can drive. In the beginning when I was first diagnosed as legally blind I used to wake up disappointed as in my dreams I could see so well.”

We interviewed five blind or visually impaired people in October and November 2021 via telephone. The transcripts from the interviews were then interpreted and brought to life by a designer.

Healthline, Different Types of Dreams and What They May Mean About You – Accessed December 2021: https://www.healthline.com/health/types-of-dreams#standard-dream