Visual Disturbances: What Are They? (& What to Do)

Home » Vision Education » Visual Disturbances: What Are They? (& What to Do)

Visual disturbances occur when you experience a change in your vision that is not indicative of normal eye health. The term is most often used when discussing symptoms that affect people who suffer from migraines, but it can be applicable in other scenarios. (Learn More)

The most common instance of visual disturbances is generally unrelated to migraines. Floaters are blobs or spots in your vision, and most people will experience these at some point in their lives.

While common, large floaters or a sudden onset of them can be indicative of a more serious issue. Consult with a doctor immediately for such issues, as failing to do so could lead to blindness in the affected eye. (Learn More)

There are a myriad of visual disturbances associated with migraines, even though only about 25 to 30 percent of people who suffer from migraines experience them. They usually occur for about 10 to 30 minutes, and almost always for less than one hour. They generally precede a headache, but they sometimes occur alongside one.

Some people’s migraine symptoms change as they age, with headaches getting less severe. By 50, some people will experience visual disturbances without experiencing any headache at all. (Learn More)

If you experience a sudden change in your vision, such as an increase in the severity, length, or symptoms of your visual disturbances, you should see a doctor immediately. If your symptoms seem radically different, you should be especially concerned.

Stroke symptoms can sometimes be confused with those of a migraine. If you experience migraines, talk to your doctor about ways to tell the difference between a migraine and a stroke. (Learn More)

Symptoms like numbness, confusion, and trouble walking are other signs of a stroke that go along with visual disturbances and headaches. If you or someone you know may be experiencing a stroke, call 911. (Learn More)

Visual disturbances on their own are usually not serious, but you should always see a doctor if you do not have an explanation for them, or they seem severe. Once you understand what your visual disturbances tend to look like and why, you only need to see a doctor again for them if there is a change that you cannot explain. (Learn More) 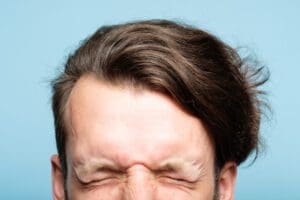 A visual disturbance is any change to your vision that is not indicative of normal health and function. The term is most commonly associated with the disturbances seen with migraine headaches, but they can also be a sign of more serious issues like a stroke.

It can be helpful, even potentially lifesaving, to familiarize yourself with the nature of visual disturbances. If you frequently suffer from migraines, it is doubly important, as the symptoms of a stroke may masquerade as those of your normal migraine auras and other disturbances.

Floaters are blobs and spots in your vision. They are the results of particles or impurities in your eye’s vitreous casting shadows on the retina. Most people will experience floaters at some point in life, and generally, they are harmless. 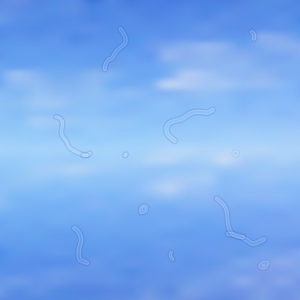 Floaters become more common as people age, when the vitreous close to the retina becomes more fluid, and impurities can flow more freely. Even if they are not usually serious, they can sometimes be indicative of a serious eye disease or condition. If you suddenly notice floaters, or you notice a large one, see an optometrist as soon as possible.

According to the American Migraine Foundation, 25 to 30 percent of migraine sufferers experience visual aura symptoms. Importantly, these symptoms usually occur in both eyes.

This can be confusing, as the issue may only appear on one side of your visual field, such as the right side. To test, you can close one eye, check for the disturbance, and then do the same for the other eye. If you only see it in one eye, it may be indicative of a more serious problem.

The following are some examples of the visual disturbances a migraine can cause:

The symptoms of migraine disturbances can be categorized into three groups.

With migraines, visual disturbances of any kind typically occur for 10 to 30 minutes, and they rarely last over an hour. They usually precede a headache, but they may occur during one instead.

Your experiences with migraines may change as you get older. Some people may experience migraine-related visual symptoms but no actual headache around age 50 or older.

Visual disturbances are sometimes representative of bigger dangers than they first appear.

As already discussed, floaters can sometimes represent serious eye disease or even retinal detachment. New visual disturbances, especially those that are only present in one eye, can also represent a serious problem.

Painless dark spots or floaters that are new, sometimes accompanied by flashes of light or loss of vision, may mean you have experienced a retinal or vitreous detachment. You should see an ophthalmologist right away, as vision loss may become permanent.

The transient loss of vision in one eye can be a warning sign of stroke or inflamed arteries. These episodes usually last 30 minutes, and they are not associated with headache. They are especially worrisome if you are over 45 years old. If you experience these symptoms, see an see an ophthalmologist, neuro-ophthalmologist, or neurologist immediately.

Frequent migraines can hide symptoms of a stroke. This can have deadly consequences, as immediate help is needed in the case of a stroke.

If you or someone you know shows any of the following symptoms, call 911 immediately:

Unfortunately, two other indicators of a stroke can be sudden trouble seeing in one or both eyes and a severe headache. If you suffer from migraines (and therefore frequently experience these two symptoms), talk to your doctor about ways to note the difference.

If you are unsure whether you are having a stroke, call 911. It’s always best to err on the side of safety.

Should I Be Concerned About Visual Disturbances?

Visual disturbances can be frightening. You should always seek an explanation from a trained professional about why they occurring.

Oftentimes, they are just an unfortunate but not generally dangerous symptom of another condition. At the same time, they can sometimes represent a serious issue.

Be mindful of changes to your vision. Even if you commonly experience visual disturbances, sudden changes to their severity, duration, or type can be indicative of a worsening problem or a different issue.

Take visual disturbances seriously. They occur for a reason. See a doctor and get a professional diagnosis of why they are happening. Generally speaking, you will not need to worry, but it is best to have the issue professionally assessed.

Once you have a diagnosis, you do not need to see a doctor every time your symptoms occur. You should see one again if you experience any changes or significant problems.

Anatomy of the Eye. University of Michigan.

Visual Aura and Scotomas: What Do They Indicate? (September 15, 2015). Review of Optometry.

Floaters, Spots, and Flashes. The NZ Association of Optometrists.