Every state has a vision portion of the driving test you must pass before receiving your license. Usually, you must have 20/40 vision to drive unrestricted, and some states also have certain visual field requirements.

There is a big focus on visual acuity when discussing whether it is safe to drive. But some studies suggest the focus should actually be on other elements of vision, such as visual field and contrast sensitivity.

Retesting vision on a regular basis could help with safety. The data is incomplete, but statistics suggest as many as 2 to 3 percent of people currently driving would fail a properly conducted vision test if they had to take it again.

The debate about restricting driving can be a tough one, as it involves restricting a person’s autonomy.

While blind individuals cannot drive (both legally and practically speaking), some states allow low-vision drivers to drive under certain conditions. Usually, their vision must be around the 20/70 point, and they must still have a relatively good field of vision.

Low-vision drivers are sometimes required to have restricted licenses. Requirements for these licenses usually mandate that they only drive during the day, and sometimes, they must have special modifications on their car. 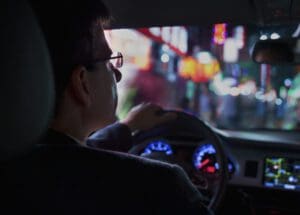 In every state in the U.S., you will be subjected to a vision test when getting your driver’s license. While states vary in how strict their driving laws might be, with some states having far more rigorous testing than others, it is pretty widely accepted that drivers should meet at least some standard of vision.

Putting aside elements unrelated to vision, such as the written and practical tests most states require, states will generally require that drivers have 20/40 vision or better in at least one eye to drive unrestricted. Drivers who can achieve that level of vision with glasses will usually be able to drive unrestricted beyond needing to wear their glasses or another form of vision correction while driving.

Some states also require certain visual field ranges for drivers, and these usually focus on the horizontal temporal field. Our eyes don’t just see straight ahead of us. We instead have a visual field (also referenced as a field of vision). Basically, visual acuity is how much detail we see, and visual field is how wide we can see when staring straight ahead.

Healthy eyes allow us to see in a fairly wide (155 degrees or more) horizontal field. Many states require that a driver is able to see 100 degrees or more in their horizontal field in at least one eye. This theoretically allows drivers to catch enough important details on either side of their car while still paying attention to what is in front of them.

If you fail a vision driving test, it doesn’t mean you will automatically be denied a driver’s license. Some states will give you a form that your eye doctor must complete. The completed form will provide information on your vision condition, how it affects your driving abilities, and whether your vision can be corrected.

Your vision may be retested at this point. You will likely have to complete a practical driving test, demonstrating that you drive safely despite your vision condition.

Facts on Driving With Vision Impairment

Visual acuity alone has been shown to not necessarily be an effective measure of how risky a person will be on the road, at least according to some studies. A very careful driver with relatively poor visual acuity would still likely drive better than a driver who takes unnecessary risks with good visual acuity.

Instead, the cited study suggests more comprehensive testing (which involves contrast sensitivity, visual field, processing speed, and divided attention tests) would help to better ensure it is safe to let a particular individual drive. Some of these tests may be additionally or even primarily testing the driver’s brain rather than their eyes, but this is obviously also important for safe driving.

With all this in mind, here are some notable facts on driving and vision impairment: 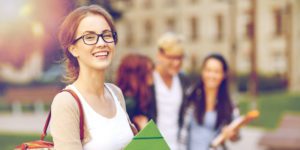 The debate between what freedoms to allow people versus how to best keep them safe is one that is ongoing and reaches far beyond just driving and vision.

Statistically speaking, cars are fairly dangerous. Completely banning the majority of people from driving unless it is an emergency would save huge numbers of lives. However, that is clearly unreasonable. To most people, this would be a wildly undesirable limitation of freedom, even if it greatly reduces fatalities.

Instead, lawmakers generally try to find the line of risk a person has to cross before they will no longer allow them to drive. In theory, this means lawmakers aim to determine which citizens are relatively likely to seriously injure themselves or others in a car accident if they were to drive, and stop these individuals from driving. This involves acknowledging statistical risks and fully assessing both the potential harm of letting them drive versus the harm it may do to them if they are not permitted to drive.

This debate often comes up regarding the elderly and people with disabilities. Both these groups often have their autonomy restricted by both their own limitations and also by legal limitations.

Each state determines at what level of vision that line of safety is crossed. They then outline vision driving requirements accordingly.

Most people understand that we cannot allow someone who is blind to drive. While driving, decisions must be made very rapidly using visual information. This doesn’t leave sufficient time to use things like sound or modern sensor aids to avoid serious accidents.

That being said, technological shifts are increasing the potential for opportunities for blind individuals to get around easily via car, such as self-driving cars,

What some people may not realize is that blindness, legally speaking, does not necessarily mean a person has no vision. Total blindness, when someone receives no visual feedback, is rare. It is often called no light perception (NLP).

Legal blindness is more common. This is defined as having 20/200 vision or worse with corrective wear in your best eye and/or a visual field of 20 degrees or less with your best eye. Meanwhile, a level of visual acuity of 20/70 in your best eye (even with corrective wear) is considered low vision, often called partial blindness. Low vision means that the vision impairment cannot be corrected beyond the level of 20/70 with glasses or contact lenses. Put another way, corrective eyewear will not get you to 20/40 or better vision.

Generally, they will only be allowed to drive if they meet certain visual field requirements. This usually means they must be able to see over 100 degrees horizontally.

A Roadmap for Interpreting the Literature on Vision and Driving. (May 2015). Survey of Ophthalmology.

Low Vision and Legal Blindness Terms and Descriptions. American Foundation for the Blind.