Eye Worms: What They Look Like & How They Are Removed

Home » Conditions » Eye Worms: What They Look Like & How They’re Removed

Eye worms are the result of an infestation with a parasitic worm where the larva or the adult worm itself moves to the eye.

Some of the parasitic worms or conditions associated with such an infestation include gnathostomiasis, loiasis, onchocerciasis, toxocariasis, and ocular cysticercosis.

Treatment for eye worms includes ridding your body of the parasite with medications and maybe even removing the worm from your eye.

Eye worm infestation is extremely rare in the United States, and only a few cases have been documented. It can be prevented by following basic hygiene practices.

Eye worms are parasites, or organisms that live off another organism. The parasite receives benefits from the relationship at the expense of the host organism.

Eye worms are most often the type of parasite that may lodge in your eye or travel through your body.

The strange worm-like specks that may occasionally drift through your field of vision are known as floaters. These are pieces of tissue that have broken off in your eye and are floating in the fluid.

Millions of Americans experience these 'eye floaters'. Floaters are not worms or parasites. They are typically harmless, but a sudden increase in the number of floaters can be a sign of a more serious condition.

Symptoms of an Eye Parasite

If you are infected with worms that have lodged in your eye, you may not even know it. If you experience any symptoms, they could include:

There are several different types of parasitic worms that can lodge in your eye.

Some of the parasites mentioned here are very rare the United States. Others may be encountered in food from the areas where these parasites are indigenous, such as fish or meat products from other countries.

The parasite is acquired by eating undercooked meat, fish, or reptiles. Once it gets into your intestines, it can move to other parts of your body, including the eyes. If the parasite gets in your eyes, it can result in partial or total blindness.

Loiasis is a parasitic worm (Loa loa) that is found in Africa and transferred to humans through the bite of an infected fly. Once it gets in your body, it develops and can migrate to different tissues. It also produces larva (microfilariae) once you are infected.

The adult worm and the larva will cause pain in the eye, visual problems, sensitivity to light, and even impaired movements of the eye. It can be treated with medications.

Onchocerciasis, also called river blindness, is caused by infection of the parasitic worm Onchocerca volvulus, which is found in the Middle East, Africa, Central America, and South America.

The worm is transferred through the bite of an infected blackfly, and the larva burrow through the skin. As adults, they produce more larva, which move to different tissues. If they reach your eyes, they can cause blindness.

Toxocariasis is caused by parasitic roundworms that are found in the intestines of dogs and cats (Toxocara canis and Toxocara cati, respectively). People acquire the worm by ingesting the eggs, which are often found in soil or other areas contaminated with the feces of dogs or cats.

These worms very rarely affect the eye. When this does happen, they can cause blindness.

Cysticercosis is an infection caused by the parasite Taenia solium (the larval stage of the pork tapeworm).

When the tapeworm affects the brain, it produces a disease known as neurocysticercosis, which is the major cause of adult onset seizure disorders in the world (adult onset epilepsy). When it affects the eye, it is referred to as ocular cysticercosis.

The worm is ingested by eating infected pork that is not fully cooked or ingesting the feces of swine. In some areas of Central and South America, crops are fertilized with pork feces. This can be a major source of contamination with the pork tapeworm in these areas and even in America (although cysticercosis is rare in America).

When the parasite affects the eye, the larva may actually be visible in the eye. Infection may not significantly affect vision, but it may produce disorders that can cause visual problems, such as glaucoma. 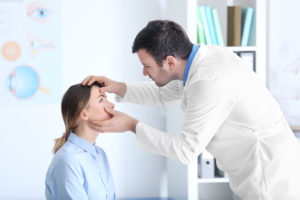 How Are Eye Worms Treated?

Parasitic worms are treated with very powerful medications that kill the worms.

In some cases, the adult worms may need to be removed from your eye by a physician. Do not attempt to do this yourself.

How Common Are Eye Worms?

The prevalence of parasitic worm cases in the United States is very low. Unless you inadvertently eat feces from animals, or eat raw or uncooked fish from other countries, you will never acquire one.

If you handle or dispose of feces from pets, wash your hands immediately. Exercise caution when dining at restaurants that serve undercooked or raw foreign delicacies, choosing only reputable establishments.

Yes, some parasitic worms such as acanthamoeba can be transmitted through direct contact with the parasite and your eye. Sharing contacts and poor hygiene are high-risk factors.

If you have a pet cat or dog, it's advisable to regularly de-worm them and hygienically dispose of their feces.

Cysticercosis of the Eye. (August 2017). International Journal of Ophthalmology

Acanthamoeba Keratitis (AK). (May 21, 2021). Centers for Disease Control and Prevention.