Nystagmus is the most common issue causing visual impairment in children, and it affects approximately 1 in 1,000 people. Certain types are more common in one sex over the other, but both men and women can be affected. (Learn More)

This condition is a complex eye condition that causes involuntary eye movements. It can be present at birth or acquired later in life. (Learn More)

It is important that people get a definitive diagnosis, so a doctor can provide a proper treatment regimen. This includes a comprehensive eye examination. (Learn More)

There are many treatments that can help people with nystagmus. This includes both surgical and medical options. (Learn More) Some people may benefit from using several treatment methods, while others might only need one to reduce their symptoms. 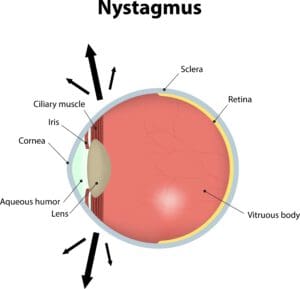 In most cases, people develop nystagmus at a young age. There are five primary types of nystagmus.

Uncontrollable rapid eye movements are the most common symptom of this condition. In most cases, the eyes move from side to side. However, there are times when the movement is circular or up and down. Both eyes are usually affected. The movement can be fast, slow, or transfer back and forth between the two.

There are other possible symptoms. 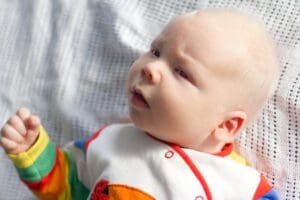 Nystagmus usually results from a neurological issue that occurs early in life or is present at birth. However, some types of this condition are acquired. This means that a person could develop them later in life.

In some cases, nystagmus is a symptom of an underlying condition, such as a stroke, trauma, or multiple sclerosis.

Other possible causes of nystagmus include:

Learning more about the person’s medical history is also important since certain conditions can cause nystagmus.

If the person has a medical condition that can cause nystagmus, specific tests might be done that focus on this. For example, the doctor may do additional neurological testing if the person has multiple sclerosis.

The doctor will evaluate the person’s eyes and how they move. One test that can be used to look for nystagmus uses the following steps:

Other tests that might be done will depend on the results of the examination and the nystagmus testing. Other diagnostic methods could include:

Surgery is not often performed, but some people may benefit from a procedure called strabismus surgery. The goal of this procedure is to reduce abnormal head positioning or to reduce nystagmus amplitude. This procedure usually does not completely eliminate nystagmus, but it could result in some vision improvement.

Another possible surgical option is called a tenotomy. Research shows that this procedure may broaden the null zone, improve visual acuity, and improve target acquisition. The procedure that was studied was the four-muscle tenotomy. The improvements that the researchers observed were when the person was in the primary position.

Botox may offer temporary relief from nystagmus symptoms. This is an injectable that can paralyze a muscle temporarily. By paralyzing the right muscles, it could potentially reduce a person’s involuntary eye movements. If Botox does work, the person would need to have it injected two or more times a year to continue reaping the benefits.

Medications may be helpful for some people. The type of nystagmus a person has dictates which medications might be helpful.

These medications may not be effective for all people. It could take some trial and error to determine which medications at which doses are beneficial for a particular person. These may be combined with other treatments.

For most people with congenital nystagmus, there are no treatment options. The doctor works with the patient and their parents to determine if supportive care could be beneficial for improving the person’s quality of life.

There are cases where nystagmus resolves on its own. This is typically when someone has acquired nystagmus due to a medical condition. Treating the underlying condition could resolve the nystagmus.

While there is no cure for this condition, treatments methods can be beneficial for many people. This is true for both adults and children who have the condition.

As soon as nystagmus is suspected, it is important to see an eye doctor to get a definitive diagnosis.

Some types of nystagmus affect only one eye, while others affect both. When both eyes shake, this is called bilateral nystagmus.

There are two basic types of bilateral nystagmus.

There are also two basic terms for the rhythm of the eyes in nystagmus.

It is therefore possible to have a combination of these. For example, you may have pendular conjugate nystagmus or rhythmic dissociated nystagmus.

While some ophthalmologists diagnose bilateral vs. unilateral nystagmus, the medical community also believes that it is possible that “unilateral” only indicates asymmetric nystagmus, with one eye more affected than the other, but both eyes still affected by the condition.

As early as 1908, bilateral nystagmus was considered the most common type, or the “true” nystagmus, with equal, simultaneous, horizontal movements in the eyes. Vertical nystagmus, rotary nystagmus, and mixed nystagmus are much rarer.

Some severe conditions may cause vertical, rather than horizontal, nystagmus. These include the following:

The most common cause of bilateral nystagmus, in general, is a vascular disease. This may include the following:

Nystagmus has several potential causes, so it is important to get help from your ophthalmologist if you develop this condition, or your child develops it.

Your vision can be seriously impacted in some cases. In others, you may not notice nystagmus, as the body develops it as a vision coping mechanism, especially when the form is bilateral nystagmus. This can be one of several other symptoms you experience, which indicate a severe underlying medical condition that requires help.

A Guide to Nystagmus. All About Vision.

CT Scan of the Head/Brain. Cedars-Sinai.