An epileptic seizure will make a person’s eyes react in distinct ways, such as uncontrollable fluttering, staring, or jerking movements. Some people experience visual hallucinations or auras.

Researchers have noticed that the eyes can be examined for information about the seizure after it happens, giving them clues as to how the disturbances in the brain develop. The effects on the eyes can also help doctors distinguish between epileptic and non-epileptic seizures.

How Epilepsy Affects the Eyes

Epilepsy is a neurological condition where abnormal electrical activity in the brain, largely due to chemical changes, causes recurring seizures. 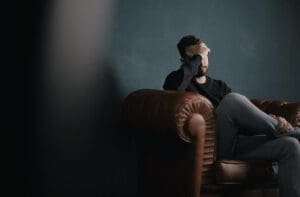 Seizures that are caused by epilepsy are not known to affect vision, but it is quite common for patients to experience a number of changes to their vision immediately before and during a seizure.

This is because epilepsy affects different lobes of the brain. Depending on which region of the brain is producing the chemical changes that cause the abnormal electrical activity, the effects on the eyes might present themselves in different ways.

If a seizure originates from the occipital lobe, this is likely to cause visual disturbances. A person experiencing this type of seizure might show a rapid flickering of their eyes, forced closure of the eyelids, and the eyelids uncontrollably jerking.

Visual hallucinations can show up as the person seeing flashing lights, colors, or unusual patterns in their field of view, when no such visual stimuli are actually present. These can appear as simple shapes or colors, but they can also look very complex, such as seeing people, animals, or even fully developed scenes. In 2016, for example, the Epilepsy and Behavior Case Reports journal featured a case study of a man who had “cinematographic hallucinations,” where he would see distorted images of people in color, as if he was looking at “frames in an old movie.”

So-called focal seizures are often preceded by auras, when the patient experiences a light or smell before the seizure commences. It is believed that the aura is caused by the abnormal electrical activity taking place in the brain, implanting the perception of a light or smell when none is actually present.

While the patient experiences the aura, bystanders may notice other symptoms, such as the patient staring off into the distance, blinking rapidly, or jerking the eyes back and forth, all while being unresponsive to others. 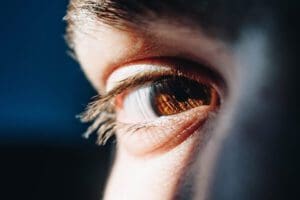 There are also perceptive illusions (examples include macropsia, micropsia, and depersonalization), where the patient can “see” their body image from a third-person perspective. In rare cases, patients experience what is known as Alice in Wonderland syndrome, where they perceive a stationary object moving away from them or again see some kind of out-of-body visual experience.

Seizures that take place in the visual processing centers in the brain (within the cerebral cortex) are associated with palinopsia, which is the persistent perception of visual images after a stimulus is removed (also known as visual perseveration). In other words, people continue to see the image of an object that they had just been looking at, even after they cannot see it any more.

Deviations of the eyes are also associated with seizures that affect the occipital lobes and other lobes of the brain that regulate eye movement and vision. This results in what is known as versive movements, where the eyes (and/or other parts of the body) are forced into an involuntary and unnatural position, sometimes for a long period of time.

Photosensitivity is another common visual symptom of an epileptic seizure. A sensation of a bright, blinding light, or a negative reaction to such a light, is a frequent sign of the onset of a seizure for many people.

What the Eyes Can Tell Us About Epilepsy

One effect of epileptic seizures having such a pronounced effect on the eyes is that it might give doctors a way to detect brain inflammation and its own impact on seizures. The Journal of Neuroinflammation suggested that the immune response in the eyes can offer a noninvasive way of seeing the parts of the brain where seizures start, in as little as six hours after the seizure. Animal experiments found an increase in the number of specialized immune cells in the central nervous system, as well as an increase in the amount of certain cytokines, signaling molecules produced by cells in the immune system.

The researchers writing in the study concluded that epileptic seizures induce a particular immune response in the eyes, which further suggests that measuring the degree of that inflammation can be a noninvasive way for detecting brain inflammation.

This is promising. Although epileptic seizures have long been suspected to cause an immune response in the brain, the mechanism of that was not fully understood. By seeing what an epileptic seizure does to the eyes, scientists can work backwards to better understand the full scope and impact of epilepsy on the affected regions of the brain.

Another way the eyes can help with the understanding of seizures is by looking at the movements of the eyes themselves during an epileptic episode. Researchers writing in the Neurology journal looked into whether a patient’s eye movements during their seizure can distinguish whether the seizure is caused by epilepsy or due to another (psychological) reason.

The difference will help doctors and first responders make a more accurate and quicker diagnosis when attending to a patient who experiences a seizure. This will also help in proper prescription protocols. Approximately 33 percent of patients with an epilepsy diagnosis do not respond to anti-seizure drugs, which might be because their seizures are not epileptic in origin.

But now, by making the connection with the eyes, researchers are hopeful that incorrect diagnoses can be adjusted sooner in the process. This will help many patients avoid almost a decade’s worth of unnecessary medication and stress.

Alice in Wonderland Syndrome: A Rare Neurological Manifestation With Microscopy in a 6-Year-Old Child. (Sept-Dec 2014). Journal of Pediatric Neurosciences.

The Lateralizing Significance of Versive Head and Eye Movements During Epileptic Seizures. (May 1986). Neurology.

New Treatment Options for People With Drug-Resistant Epilepsy. (May 2019). The University of Chicago Medicine.

What Is a Pseudoseizure? (June 2018). Medical News Today.