Many people make it a priority to see their doctor at least once a year, but how often are Americans seeing their eye doctors? We surveyed more than 1,000 people across the U.S. to find out what’s holding them back from prioritizing their visual health.

For many people, cost and distance are contributing factors, as the average American lives around nine miles from their eye doctor. Our report also provides insights into the states dealing with the biggest eye doctor disparities. 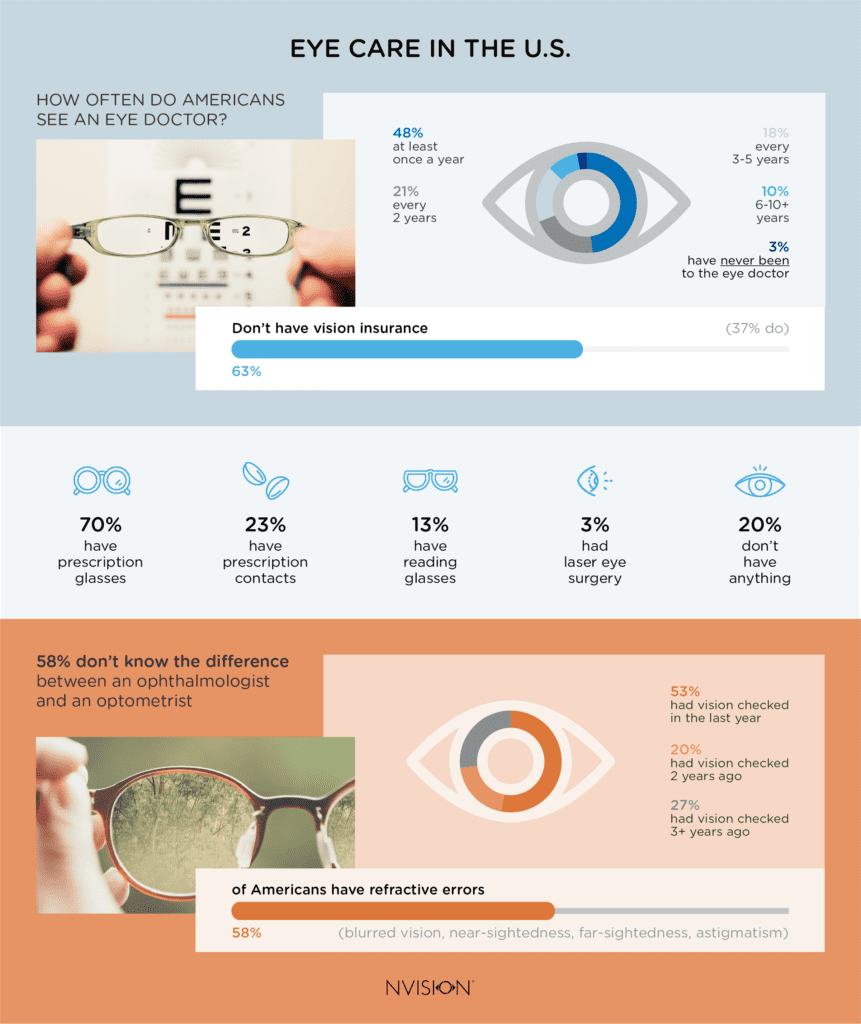 Whether or not you struggle with vision issues, it’s recommended to get an annual exam by an eye doctor. But are Americans consistently making the trek to get their eyes checked? According to respondents, 48% go at least once a year, 21% every 2 years, 18% visit every 3-5 years, 10% go every 6-10+ years, and 3% have never been to the eye doctor at all.

Overall, the majority of Americans (63%) do not have vision insurance. This may come as a surprise because many people report needing assistance when it comes to their vision. 70% of Americans have prescription glasses, 23% wear prescription contacts, 13% use reading glasses, and 3% have had laser eye surgery. One of the most common reasons for needing vision assistance is refractive errors, which include blurred vision, near-sightedness, far-sightedness, and astigmatism. Over half (58%) of Americans report having refractive errors.

Although some people haven’t recently visited an eye doctor, 53% had their vision checked in the last year. Additionally, 20% had it checked two years ago, and 27% had it looked over more than three years ago.

There are four primary types of vision specialists, and many Americans are unfamiliar with the differences. The two most common specialists are an optometrist and an ophthalmologist, and 58% of Americans don’t know the difference between them. An ophthalmologist treats eyes requiring medical or surgical interventions. Meanwhile, an optometrist manages, treats, and diagnoses eye diseases.

Americans Who See Their Eye Doctor 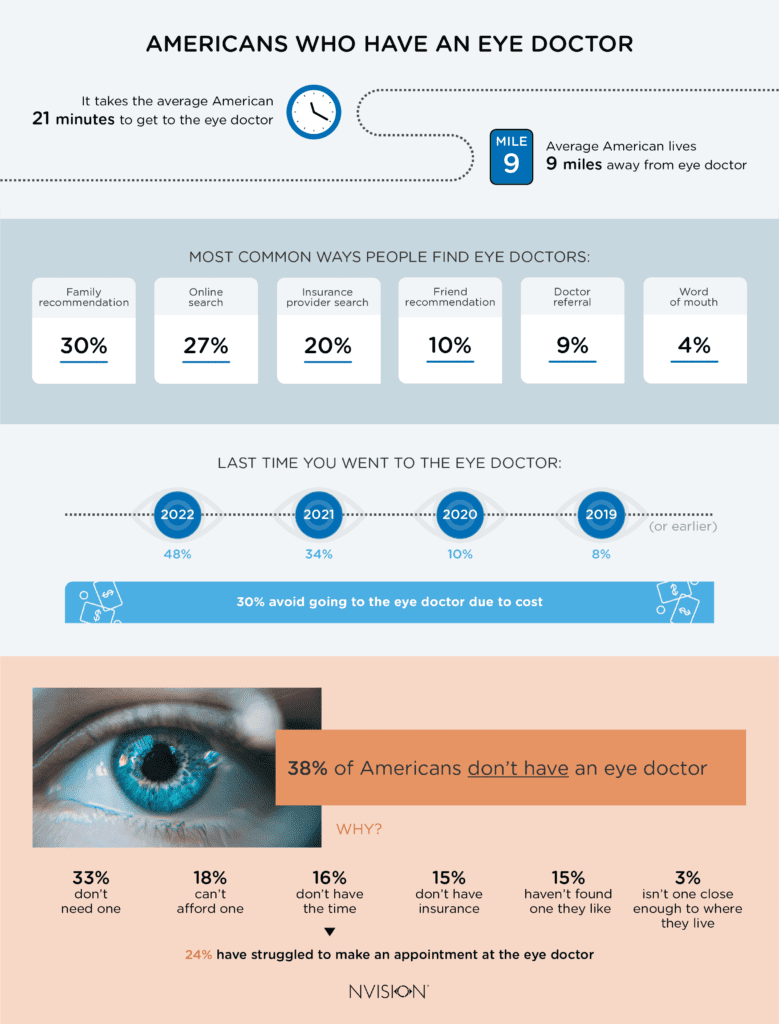 Among Americans who currently have an eye doctor, it takes the average person 21 minutes to get to their optometrist and on average, people live nine miles away. The most common ways people find their doctor are through family recommendations (30%), an online search (27%), an insurance provider (20%), and a recommendation from a friend (10%).

Among the 38% of Americans who don’t currently have an eye doctor, 33% say they don’t need one. Other reasons why people haven’t established care with a doctor include not being able to afford it (18%), not having the time (16%), being uninsured (15%), and not finding a doctor they like (15%). Additionally, nearly 1 in 4 have struggled to make an appointment at an eye doctor’s office. 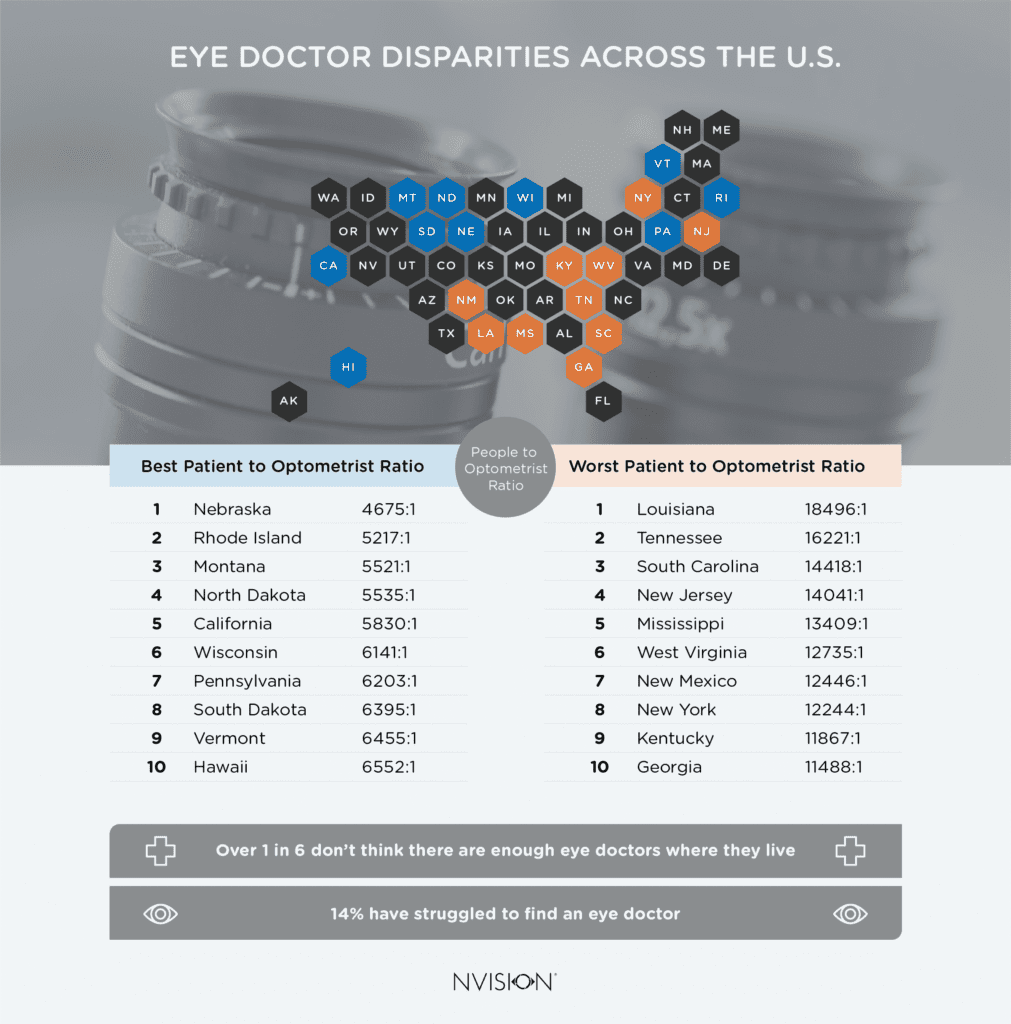 When it comes to eye doctor disparities across the U.S., some states are faring better than others. We analyzed data from the U.S. Bureau of Labor Statistics to find out which states have the highest and lowest patient-to-optometrist ratios.

Nebraska ranks first in the country with the best patient-to-doctor ratio of 4,675:1. Following the Cornhusker state are Rhode Island, Montana, North Dakota, and California.

Louisiana takes the top spot for the worst patient-to-optometrist ratio in the nation at 18,496:1. Tennessee ranks second, followed by South Carolina, New Jersey, and Mississippi.

Overall, 1 in 6 people doesn’t think there are enough eye doctors where they live and 14% report struggling to find an eye doctor.

Most Common Eye Conditions in the U.S. 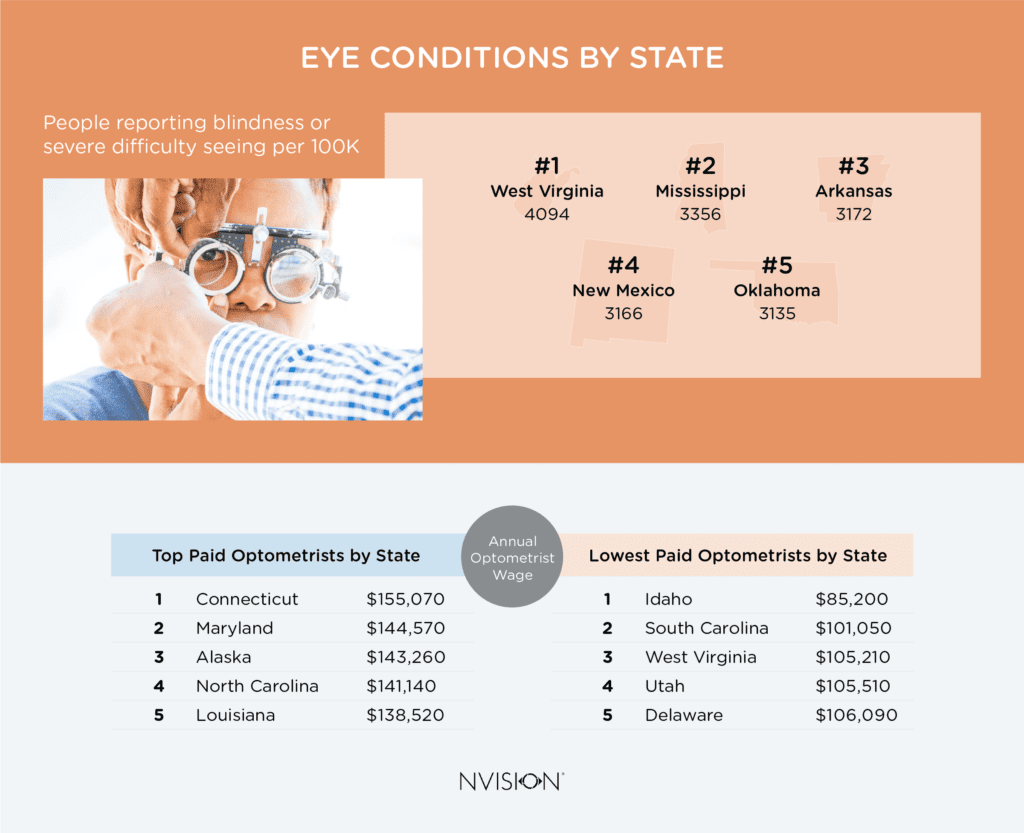 With eye doctor disparities there comes a concern for people living in certain states. Does this have any impact on general eye health in those states? Per 100,000 residents, West Virginia has the highest rate (4,094) of people reporting blindness or severe difficulty seeing. Mississippi ranks second with 3,356 per 100,000 people dealing with severe vision issues. Arkansas follows, with New Mexico and Oklahoma rounding out the top five.

When it comes to how much optometrists are being paid, there’s a big difference across the country. Connecticut ranks first for being the state with the highest-paid optometrists. The annual wage hovers around $155,070. Maryland has the second-highest annual pay at $144,570. Following Maryland is Alaska at $143,260. The states where optometrists are getting paid the least are Idaho at $85,200, followed by South Carolina ($101,050), and West Virginia ($105,210).

Whether or not you currently have an eye doctor or health insurance, it’s important to keep vision health top of mind. We encourage everyone to schedule an annual eye exam. If cost is a concern, there are several resources available that provide free or lower-cost eye exams.

When using this data and research, please attribute it by linking to this study and citing https://www.nvisioncenters.com/

To analyze the optometrist-to-patent ratios, we used the most recent data available from the U.S. Bureau of Labor Statistics.

We also analyzed the most recent Vision Health Initiative data from the Centers for Disease Control and Prevention (CDC) to understand the most prevalent eye conditions in each state.