7 Benefits of Castor Oil for Eyes & How to Use It

Home » How Does Your Diet Impact Eye Health & Vision? » 7 Benefits of Castor Oil for Eyes & How to Use It 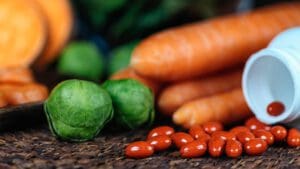 Castor oil as a remedy for eye issues may seem like an old wives’ tale, but its benefits on skin, hair, and eyes still hold true today.

As a traditional form of medicine dating back centuries, castor oil is a naturopathic method for treating many conditions, including:

There are potential side effects and possible dangers from using castor oil for your eyes, so be sure to check with your medical provider before using it. If used safely, your eyes can experience some benefits from castor oil use.

Castor oil is one of the main ingredients in several over-the-counter eye drops that are used to improve dry eyes. The oil can help to keep tears from evaporating as fast. This helps to keep your eyes lubricated for longer, which leads to less sensitivity and more comfort.

Dry eyes can be extremely uncomfortable, leading to eye irritation, redness, and additional visual complications. Studies show that castor oil improves the stability of your tear film and increases the lipid layer to improve dry eyes.

Research shows that castor oil can also be used on your eyelids to treat blepharitis, which is a disease leading to inflammation of the eyelid. Castor oil, when applied directly to the eyelid as a topical treatment method, can reduce inflammation to improve the condition.

Castor oil can also help to decrease irritation and redness around your eyes when applied topically. It acts as a natural anti-inflammatory agent that is commonly used to soothe aching joints and muscles during massage.

Infections can occur when your protective layer of tears is not acting as a barrier to keep things out.

Eye infections are often a common complication and side effect of chronic dry eye. Since castor oil helps with eye lubrication and maintaining your tears, it can also serve as a prevention measure for eye infections, including conjunctivitis or pink eye.

MGD, meibomian gland dysfunction, is one of the leading causes of dry eye. Studies show that eye drops containing castor oil are an effective treatment for this condition. Treating dry eye helps to lower your risk for eye infections and further ocular issues. 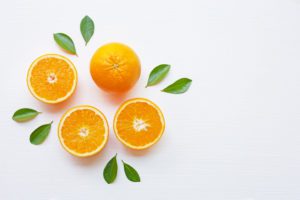 Castor oil is rich in nutrients, including those with antioxidant and anti-inflammatory properties as well as lipids and fatty acids that aid in promoting blood circulation.

Castor oil can enhance the circulation of the blood within your eyes. This can in turn decrease irritation and redness, and help to improve vision and eye-related issues.

Improved blood circulation in your eyes, as well as increased lubrication from castor oil eye drops, has been shown to improve age-related mild cataracts.

In conjunction with other homeopathic remedies, castor oil eye drops can be used before bed each night to improve symptoms and vision issues related to cataracts, studies show.

While castor oil is not going to cure cataracts, it can help with cataract symptoms by:

The only way to cure cataracts is through a surgical procedure that removes the clouded lens and replaces it with an artificial one.

While there is a lot of anecdotal reports of castor oil helping hair and eyelashes grow, there is no scientific evidence to support this. Castor oil can improve the appearance of your eyelashes by making them shinier and glossier. It can also help them to seem thicker and less matted together.

Castor oil is made up of mainly ricinoleic acid, which is high in triglycerides. The triglycerides in castor oil help to moisturize your eyelashes to give them more luster.

7. Reduction of Dark Circles & Wrinkles Under the Eyes

Castor oil contains omega-3 fatty acids that act as a natural moisturizer to keep your skin hydrated. The active agents of castor oil can help to heal and protect the delicate skin under your eyes, which can decrease the appearance of wrinkles and dark circles.

Along with improved circulation, the antioxidant and anti-inflammatory properties of castor oil can improve the way the skin under your eyes looks. 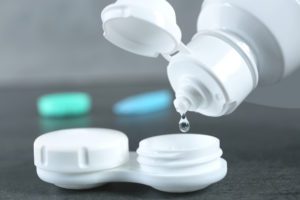 Check with your medical professional before using castor oil for your eyes, as it can have some risks and side effects. It is not ideal for everyone.

The American Academy of Ophthalmology (AAO) recommends talking to your ophthalmologist about what to use for your specific condition, as there is often a better option than castor oil.

Do not use castor oil if you:

The most common side effects of using castor oil eye drops are blurry vision, itching, and swelling. Blurry vision often clears up after a little bit of time as the castor oil dissipates. If you experience irritation or further issues like dizziness, nausea, or trouble breathing, you should stop using castor oil immediately.

If you use castor oil for eyes, be sure to choose artificial tear or eye drop products made for eyes that contain castor oil and not non-sterile castor oil by itself.

If applying castor oil topically, be sure to wash your hands before application and gently massage the oil around your eyes.

Remember to talk to your eyecare provider before using castor oil to make sure it is the best option for your eye health.

Study: Castor Oil May Improve Blepharitis. (May 2020). Review of Optometry.

What to Know About Castor Oil for Eyelashes. (June 2019). Medical News Today.

Is It Safe to Put Castor Oil in My Eyes? (March 2014). American Academy of Ophthalmology (AAO).