Blue Light Glasses: Can They Protect Your Vision?

Home » Everything About Glasses in 2022 (& How to Choose a Pair) » Blue Light Glasses: Can They Protect Your Vision?

Blue light glasses are designed to block blue light rays. They are generally marketed as computer glasses, to block the blue light commonly exuded by computers and other electronic screens. While many claims are made about these glasses, not all of them are true.

While these glasses block blue light, the claim that blue light causes permanent eye damage is false. The light that does cause such damage, UV light, is not given off by screens. It’s a good idea to reduce exposure to blue light overall rather than just wearing blue light glasses.

There is little evidence that blue light glasses help with eye strain, which is the most common marketing claim associated with them. There is evidence that wearing them before bed can help you sleep better if you frequently look at screens before bed, as blue light is known to affect sleep patterns.

These glasses are comparable in price to other glasses, and it is possible to get prescription blue light glasses. Be mindful of whether your insurance policy will cover blue light glasses. With limited evidence of their efficacy, some insurance companies may be reluctant to cover the costs.

Given the many false claims out there, be wary of believing everything a seller says about blue light glasses. Assess the claim being made and the evidence backing it. Claims about the glasses’ ability to help with eye strain are dubious. Claims that they will stop electronics from damaging your eyes are fabrications since electronics don’t cause such damage.

What Does Science Say About Blue Light?

While blue light glasses can indeed block blue light, there is not much evidence that this is an especially useful property. Their primary use, to prevent eye strain while staring at a computer screen, appears to largely be lacking evidence of its efficacy. While there are ways to avoid computer eye strain, blocking blue light may not be as helpful as some claim.

Any claim that these glasses will prevent permanent damage from staring at electronic lights or screens is based on a false premise. According to a 2015 study, there is no evidence these types of lights can do permanent damage to your eyes. They do not produce ultraviolet radiation, the primary way dangerous light sources like the sun do damage.

Still, recent studies suggest that it may be wise to limit blue light exposure, particularly at night. Too much exposure can result in digital eye strain, and this can lead to headaches, including migraines.

While rarely marketed for this purpose, there is evidence that blue light reduction can help with sleeping. Multiple studies, including a 2015 study, showed that wearing glasses that block blue light for a few hours before bed can help people sleep. This seems to apply to users who look at electronic screens before bed, a habit linked to sleep troubles.

Overall, the science seems to indicate that these glasses are not totally without purpose, but they also don’t prevent permanent eye damage (since the lights don’t produce the type of light linked to such damage in the first place). There is little evidence that blue light glasses prevent eye strain.

While more research should be done, many of the claims being made about these glasses are misleading or wholly inaccurate.

Blue light exposure is a field of intense interest, so research is ongoing. While the long-term negative effects are debatable, these short-term health issues are associated with extended blue light exposure:

What Are Blue Light Glasses?

Blue light glasses aim to block blue light, a spectrum of light that is common among electronic screens and certain other bright lights.

With the growing trend of Instagram influencers and other e-celebrities promoting these glasses, and a great deal of anecdotal evidence touting their advantages, many people are left wondering if the glasses can do what is claimed. 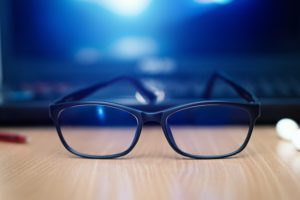 Pricing and Comparison to Regular Glasses

Depending on the quality, style, and brand, blue light glasses can cost as little as $10 or as much as $100 (or even more). This blocking property can be added to prescription lenses as well.

This is roughly in line with the cost of eyeglasses, which range from relatively affordable to hundreds of dollars, depending on brand, style, add-ons, and your prescription. Notably, prescription eyeglasses tend to be covered by insurance, which can greatly reduce their cost to you.

Popular retailers of blue light glasses include the following:

Are These Glasses Scams?

A quick review of websites selling blue light glasses will show a trend of sellers overhyping the negative properties of blue light in order to convince consumers to buy the glasses. One will quickly see misleading or simply inaccurate statements, backed with little if any hard data.

Willful or not, consumers are frequently misled about blue light glasses. While they can help with sleeping by mitigating some of the effects blue light has on the brain, it is unlikely that they help much with eye strain.

If you wish to purchase blue light glasses to avoid screen time interfering with your sleep, your purchase is relatively easy to justify. The same cannot be said for using them to avoid eye strain, although some anecdotal evidence says they can help with such strain.

Do not purchase them if you wish to avoid permanent eye damage. While they won’t worsen your risk, they don’t help in that regard. Electronic screens will generally not cause long-term damage to your eyes, with or without special glasses.

Regardless of whether you choose to purchase blue light glasses, it’s a good idea to reduce your blue light exposure if you know it is currently excessive. Follow these tips:

Are Computer Glasses Worth It? (April 27, 2017). American Academy of Ophthalmology.

Ultraviolet Radiation Emitted by Lamps, TVs, Tablets and Computers: Are There Risks for the Population? (August 2015). Anais Brasileiros de Dermatologia.

Instagram Influencers Are Promoting Blue Light Glasses That Are Supposed to Minimize Eye Strain, but the Science Behind Them Is Overhyped. (November 16, 2018). Insider.

Do Blue-Light-Blocking Glasses Actually Do Anything? (February 13, 2019). The Strategist.

What Is Blue Light? The Effect Blue Light Has on Your Seep and More. (July 2020). Harvard Medical School.

Research Progress About the Effect and Prevention of Blue Light on Eyes. (December 2018). International Journal of Ophthalmology.

Scrolling Got Your Noggin Screaming? Blue Light Headaches Might Be to Blame. (May 2021). Greatist.