Does Anti-Reflective Coating for Glasses Work? (How?)

Home » Everything About Glasses in 2020 (& How to Choose a Pair) » Does Anti-Reflective Coating for Glasses Work? (How?)

Anti-reflective coatings, also known as AR coatings or anti-glare coatings, are applied to glasses via a series of layers adhered to the front and back of the lenses. These layers block certain wavelengths of light, helping to reduce reflection.

This coating generally costs about $20 to $90 to apply to a pair of glasses. AR coatings developed a bad reputation for quickly deteriorating in the past, but modern AR coatings usually last a fairly long time unless exposed to extreme conditions. (Learn More)

AR coating makes glass less reflective (hence the name), and this can make your glasses look nicer in photos and under bright lights. There is some debate about how much they help with glare, although many claim they reduce glare to at least some degree. Some AR coatings also have additional benefits, such as making glasses less prone to scratching. (Learn More)

Some people think anti-reflective coatings prevent UV rays from damaging the eyes, but this is not true (although such features can be combined into one pair of glasses). The American Academy of Ophthalmology has been critical of claims that AR coatings can provide significant glare resistance. They say glare resistance is generally only possible with polarized lenses, which tend to have a dark tint (making them unsuitable for night driving). (Learn More) 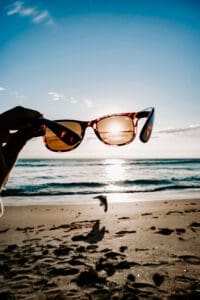 Of the options available for anti-reflective coatings, Crizal coatings are regarded as some of the best by multiple reviewers. These can be expensive though. For a cheaper coating, you will primarily want something that is not likely to smudge.

Keep in mind that AR coatings are not essential. They may only offer a minor benefit to the wearer. (Learn More)

Anti-reflective coating, also called AR coating and anti-glare coating, is when a series of layers are adhered to the front and back of lens (or just the back for polarized lenses) to reduce the reflections that normally bounce off a lens.

Each of these layers is designed to block specific wavelengths of light, allowing the glasses to have anti-reflective properties with basically no noticeable drawbacks (beyond increased cost).

This coating can cost anywhere from $20 to $90 to add to a pair of glasses. This cost is sometimes covered by insurance, although this will depend on your exact plan.

Many doctors recommend getting an anti-reflective coating. In some cases, a coating may even save you money in the long run since the coating can reduce scratching, making a pair of glasses last longer.

In the past, AR coating got a bad reputation in the United States. The technology was still in its infancy and had a serious durability problem. Nearly all modern lenses should last much longer, although there are still some drawbacks (discussed below). 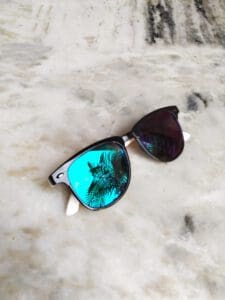 What Does This Coating Do?

The short answer is that each extra layer blocks more wavelengths of light.

The longer answer is more complicated, with some claims more controversial than others. Anti-reflective coatings may be able to:

There are some things often believed, and even claimed by sellers, about anti-reflective coatings that either aren’t true or are at least debated and controversial.

One of the most important misconceptions to dispel is the notion that an AR coating equals UV protection. An AR coating does not protect your eyes from UV rays (such as those from the sun), which can cause eye damage.

While many pairs of sunglasses come with both an anti-reflective coating and UV protection, it is important to know that not all pairs of glasses with an AR coating protect your eyes from sunlight. Be sure to research the coating you’re choosing carefully as even some sellers, willfully or not, may have misinformation on their sites claiming a coating can protect your eyes from the sun when it cannot.

Websites and dispensing opticians often claim AR coating protects against glare. This is a claim you will see almost everywhere that offers anti-reflective coatings. However, the American Academy of Ophthalmology (AAO) takes issue with this claim. 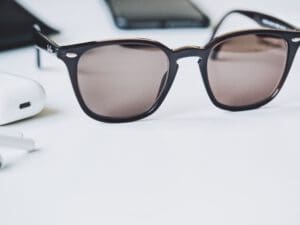 In a 2015 response to a question on the nature of anti-reflective coatings on glasses, AAO claims the ability for an AR coating to protect against glare is very slim. They go on to explain that in actuality only polarized lenses, which only come in dark tints, can properly guard against glare.

Whether one should side with AAO on this issue is difficult to say. There is little hard data on the subject. Most information on the lenses is either anecdotal or coming from a source biased toward the coating being portrayed positively, such as a manufacturer or retailer. AAO’s criticisms are certainly worth bearing in mind, as the organization is a reliable source of information.

For those on a budget, even a very basic anti-reflective coating should generally suffice. This is doubly true if you are frequently cycling through prescriptions as you and your doctor try to find what is best for your needs. You primarily will just want a coating that is not prone to smudging or scratching.

It is also worth noting, if you are on a tight budget, that an anti-reflective coating is not essential. Although many doctors upsell the coatings, the reality is that many people will notice only a minor difference in their day-to-day use.

When looking for a higher quality coating, Crizal is a very popular brand. This series of coatings, which have a number of qualities depending on what you’re looking for, are durable, effective, and well-regarded. The brand can be expensive though, adding as much as an additional $100 to the cost of glasses.

What Are the Advantages of Anti-Reflective Coatings on Eyeglasses, if Any? (February 2015). American Academy of Ophthalmology.

What Is the Cost of Crizal Lenses? (February 2019). cost-finder.com.