One way to reduce eye strain from spending long periods of time staring at a digital device is to use the 20-20-20 rule.

According to the American Optometric Association, the simple rule says that for every 20 minutes you spend looking at a digital device or computer screen, you should look at something else that is 20 feet away for a period of 20 seconds.

Eye strain is one of the consequences of living in the digital age. The symptoms of eye strain can be distressing and may have long-term consequences.

One effective approach to dealing with eye strain as a result of using digital devices to use the 20-20-20 rule. You can apply the rule very easily on a regular basis.

The 20-20-20 technique is simple, and it works. There is even research to support its use.

In addition to the 20-20-20 rule, there are other approaches to prevent or reduce eye strain, such as using eye drops and adjusting screen brightness.

Mayo Clinic reports that the use of digital devices and computers is among the most common causes of eye strain. Many people stare at computers for hours a day, increasing the risk that they will develop significant eye strain. 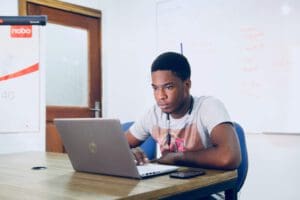 The following are symptoms of eye strain:

You can liken eye strain to remaining in the same position for hours at a time. Your eyes need to take a break from time to time in order for them to function most efficiently.

In a survey, The Vision Council found that over half of the parents surveyed reported that their children experience the symptoms of eye strain related to the use of digital screens.

The long-term effects of staring at digital screens are not well studied, but the glare from the screens could conceivably contribute to the development of myopia, or nearsightedness. There may also be a connection between chronic eye strain and the development of age-related macular degeneration, a serious eye disease that can affect your vision significantly (particularly central vision, or the ability to see and focus on objects in the center of your visual field).

In the future, research studies may reveal some surprising connections between eye strain, the use of computers and digital devices, and visual disorders.

One way to reduce eye strain from spending long periods of time staring at a digital device is to use the 20-20-20 rule.

According to the American Optometric Association, the simple rule says that for every 20 minutes you spend looking at a digital device or computer screen, you should look at something else that is 20 feet away for a period of 20 seconds.

How Should I Use the Rule?

You should take a 20-second break from looking at your digital device or your computer screen every 20 minutes. During this break, look at something else that is about 20 feet away.

Here are some strategies to help you enforce the rule:

The 20-20-20 rule was not devised by laypeople. According to Optometry Times, it was developed by an optometrist as a method of taking frequent breaks from staring at a computer screen or other digital device to reduce eye strain.

The American Academy of Ophthalmology and the American Optometric Association endorse using the 20-20-20 rule as a method of reducing eye strain.

According to the American Academy of Ophthalmology, looking at screens for prolonged periods does not cause permanent eye damage. But you're likely to experience some eye problems like blurring vision and strain.

Humans blink 15 times every minute on average. For regular screen users, the frequency reduces to as little as five times a minute. The result? Dry and tired eyes, blurred vision, headaches and neck and shoulder pain – all of which make up computer vision syndrome.

A study conducted of five Malaysian Universities examined 795 students who used computers. Nearly 90 percent of the students had symptoms of computer vision syndrome. Symptoms were more pervasive in those who looked at screens continuously for more than two hours per day. But the CVS symptoms were not as prevalent in individuals who took broke up their screen time with consistent breaks to look at far-away objects.

Students who frequently refocus while using visual display units like computers and tablets experience milder symptoms of computer vision syndrome, according to a study published in the Wiley Online Library. Symptoms were more abundant in students who used visual display units for more than three hours per day without refocusing.

Research indicates that observing the 20-20-20 Rule of eye care effectively reduces strain and other symptoms resulting from prolonged screen use. While very few studies have evaluated the technique's efficacy, the 20-20-20 Rule is widely accepted among eye care professionals.

Bottom line: Frequent breaks from the screen, including the 20-20-20 Rule, is essential in preventing computer vision syndrome.

For a regular user of computers and other digital devices that require screen time, the 20-20-20 Rule requires that after spending every 20 minutes on the screen, you take a break and look at an object 20 feet away for 20 seconds. That can be easier said than done.

For instance, how would you tell the object you're focusing on is at least 20 feet away? But it’s OK not to be exact in your measurements. If you work in an office, you can try looking at distant objects like buildings across the street or trees, and this is sufficient to rest your eyes and prevent computer vision syndrome.

The 20-20-20 Rule is designed to create more blinks from your eyes. The blinking is what lubricates the eyes and staves off conditions like dry eye and tired eyes.

Proper hydration is also essential for healthy eyes. When you do take a break, enjoy some water or a cup of green tea. Antioxidants in green tea enhance tear secretion, thereby reducing the risk of dry eyes.

If necessary, set up a consistent alarm for yourself so that you can practice the 20-20-20 Rule. Or use a phone app, such as Eye Care 20 20 20, to integrate more faraway focuses.

Other Ways to Prevent Eye Strain

The 20-20-20 rule is designed to give your eyes frequent breaks from the computer, and it is an effective method to prevent eye strain.

There are some other actions you can take in addition to using the rule.