The History of Contact Lenses (& a Look at the Future)

Home » Understanding Contacts: Are They the Right Solution for You? » The History of Contact Lenses (& a Look at the Future)

The origins of the idea for the contact lens can be traced back to Leonardo da Vinci and René Descartes. (Learn More)

Early attempts to develop contact lens-type devices were crude. Even though more practical lenses were conceptualized, the technology was not there. (Learn More)

The idea of fitting a contact lens to meet the contours of a specific person’s eyeball had been around for quite some time. It took many years for technology to be able to fulfill this idea. (Learn More)

Early contact lenses covered the entire eye, resulting in an uncomfortable situation, but the lenses were eventually downsized. (Learn More) As technology improved, the lenses became curved, thinner, and made of materials that allowed for a longer wear times. (Learn More)

The current technology applied to contact lenses will allow for many potential future applications that go beyond just improving vision. (Learn More) 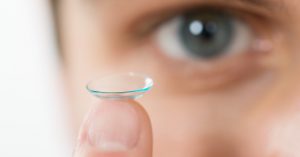 One can trace the use of spectacles to depictions in art as far back as the 1200s. They were most often worn by monks or other scholars of those early eras. However, the notion of actually placing a corrective lens on the eye did not exist for some time after that.

It appears that in the 1508 Codex of the Eye, Italian inventor Leonardo da Vinci developed the notion that submerging one’s head in a bowl of water could alter or improve vision. He is reputed to have created a glass lens with an area on one side where water could be poured into the lens, but the device was not practical.

French scientist René Descartes reviewed da Vinci’s work. In 1636, he proposed placing a glass tube filled with liquid in it (often referred to as the Descartes’ tube) that made direct contact with the cornea, the clear membrane of the outer eye. His invention appeared to work, but it was impractical.

Nonetheless, the term contact lens was eventually coined as a result of these types of experiments because the lens makes direct contact with the eyeball itself.

In 1801, he based his lenses on Descartes’s idea, but he changed the lens by downsizing a glass tube to a quarter of an inch and then applying wax to the edge of the lenses to fasten them to his eyeballs. Unfortunately, like Descartes, this device was not practical, and it did not correct problems with vision.

In 1845, the English mathematician Sir John Herschel studied irregularities of the cornea and proposed taking a mold of the person’s cornea to produce a lens that would assist with visual problems by fitting snugly. However, technology at the time was not advanced enough to test this hypothesis. 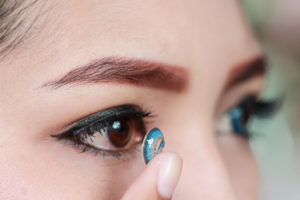 In the 1880s, the technology for forming glass improved to the point where shaping thin contact lenses had become more practical. Around the same time, several different scientists developed contact lenses that fit the eyeball and allowed the wearer to blink their eyes.

German scientist F.A. Müller used a contact lens based on materials manufactured by a German company that consisted of blown glass. The lens was developed to protect an eye that had been damaged.

The lens was designed to prevent the person’s eye from drying out. The person’s other eye had been lost, and they had an artificial eye. The lens was worn regularly for short periods by the client for approximately 20 years.  Müller’s lens was reputed to have enabled the person to have “usable vision” in the functional eye.

Despite Muller’s development, the credit for the first wearable lens usually goes to Dr. Fick who was a Swiss physician. His discourse, A Contact Spectacle, described the first contact lens that used light refraction to improve vision.

Along with French ophthalmologist Eugene Kalt, he was able to develop a glass lens. However, the lenses were uncomfortable and quite thick. They could only be worn for several hours at a time. They were made from heavy blown glass; they were 18/20 mm in diameter; and they covered the entire eye.

Since the eyes get their oxygen directly from the air around them, the lenses had to be removed periodically or the wearer would suffer great discomfort and pain. There was also a risk of damage to the eye if the lenses were left in too long.

Technology Catches Up to Herschel’s Idea

As mentioned above, Sir John Herschel proposed creating molds of each specific cornea in order to install corrective lenses directly on the eye. By the 1920s, advances in technology and medical anesthesiology allowed for his ideas to come to fruition.

In 1929, Dr. Josef Dallos and Istvan Komàromy (both Hungarian) were able to develop a method of making molds from eyes in order to create personalized contact lenses.

In the 1930s, the development of new plastics made it possible to apply the technology to more lightweight, yet transparent lenses, that were resistant to breaking or scratching. These were easy to make.

This resulted in the glass contact lens becoming obsolete. The lenses still covered the entire eye and could only be worn for a few hours at a time without significant discomfort.

In 1948, English optician Kevin Tuohy was busy making a plastic lens when part of the lens broke. Instead of starting over with a new lens, he decided to try a smaller lens, sanded the edges, and put it in his own eye. He was surprised to find that the lens worked and allowed him to blink without discomfort.

This was the birth of the corneal lens — the lens that only covers part of the eye. Lenses that covered the whole eye were referred to as scleral lenses.

Following Tuohy’s alteration of the lens, in 1950, George Butterfield developed the idea of a curved (rather than flat) lens design, which was even more comfortable. In the later 1950s, thinner lenses were developed, and lenses became even thinner in the 1960s.

However, even the corneal lenses still hindered oxygen flow to the eyes. A person could not wear the lenses overnight or for extremely long periods of time. But in 1958, Czechoslovakian chemist Otto Wichterle developed hydrogel, a plastic that was very soft and pliable that could be shaped and molded.

In the 1990s and beyond, hydrogel contact lenses were developed that had a very high permeability for oxygen. This allowed the eyes to breathe, and users could wear them for extended periods or even when they slept. 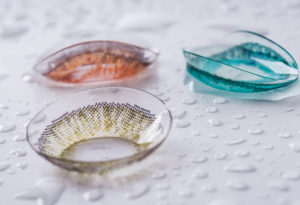 There have been rumors of some patents that apply to contact lenses being taken out. These include lenses with glucose monitoring capabilities for diabetics and other interesting medical applications or other practical applications for contact lenses. For instance, it is rumored that smart contact lenses can be developed that can scan barcodes while syncing with other devices to enhance shopping.

The Sony company is reputed to be working on contacts that would start recording videos after a deliberate blink that is detected by the lens. The lenses would be driven by sensors that get power from your eye movements, and the storage unit would be directly in the lens.

Companies like Samsung appear to be able to develop smart contacts that can play a video directly into your eye. This leads to the possibility of augmented reality, where objects in the environment can be altered by computer-generated images.

Google apparently holds a patent for solar-powered smart contact lenses that enhance other technological uses, such as monitoring blood temperature or blood alcohol levels. Other health-related technological benefits may also be available in the future, such as lenses that monitor glaucoma.

Why a Smart Contact Lens Is the Ultimate Wearable. (May 2016). Computerworld.