Lazy eye (amblyopia) is caused by a disruption in the connection between the retina and the brain, resulting in the affected eye not being able to communicate with the brain (Learn More) Specially designed video games can help by exercising the connection, forcing the brain to reestablish communication with the weaker eye. (Learn More) 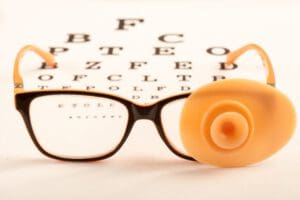 A lazy eye, or amblyopia, develops because something happens early in a person’s life that changes the nerve pathways that connect the retina to the brain. The affected eye becomes weaker, receiving fewer visual signals from the brain. Over time, the eyes lose the ability to work together, and the brain will start to ignore visual input from the weaker eye.

What can cause a lazy eye? The Cleveland Clinic writes that if a child has a muscle imbalance, it means that the muscles responsible for positioning the eyes themselves can cause the eyes to cross inward or look outward, preventing the eyes from coordinating.

Refractive amblyopia happens when there is a drastic difference in the visual power (prescriptions) of each eye. In addition, a problem developing in just one eye, like cataracts, can prevent that eye from processing visual information properly. This is usually the most severe form of amblyopia.

Lazy eye is the most common reason for permanent vision damage in childhood. The National Eye Institute estimates that 3 out of every 100 children have it.

How Do Video Games Help a Lazy Eye?

When a child has a lazy eye, the usual form of treatment is to cover the stronger eye, forcing the weaker eye to become stronger and catch up to how the stronger eye works. But in December 2016, researchers writing in the JAMA Ophthalmology journal suggested that specially designed video games could make for a more effective amblyopia treatment than covering one eye.

The researchers conducted a study where 14 children used an eye patch, and another 14 played a video game. After two weeks, the kids who played the video games had a better degree of improvement in their affected eye than the kids who wore the eye patch.

The study confirmed findings that had suggested there is nothing physically wrong with a lazy eye. Rather, the problem lies in the fact that the brain cannot properly communicate with the affected eye.

The proper application of video games means that, at an early age, children who have amblyopia might be able to get their brain to work with the weaker eye by improving the connections between the brain and the eye. This can be done by training the eyes to work together.

Even though amblyopia typically occurs in just one eye, the researchers discovered that the condition “affects both eyes and the ability to use both eyes together.” While wearing an eyepatch does force the brain and the weaker eye to communicate, it does not help the eyes learn how to work together. 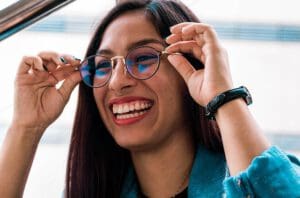 How exactly can video games help a lazy eye? On a surface level, playing a game is fun and engaging, so the child is more likely to persist with the exercise. This will increase the rate at which the affected eye works to improve its brain connection.

But it’s not simply play. The kids who participated in the project had to wear special goggles that isolated each eye, which allowed the game (also specially designed) to present different stimuli to each eye. Through the goggles, the game showed high-contrast images to the weaker eye and low-contrast images to the stronger eye.

By doing this, the game helped to strengthen the connections between the weak eye and the brain. It also helped the eyes to work together.

Simply playing video games with the stronger eye closed is not an effective way of treating lazy eye. The process needs to be carried out under the supervision of an optometrist.

Even as the researchers were optimistic about what their study found, they noted that it was too soon to say whether video games would replace eyepatches as the standard treatment for lazy eye. 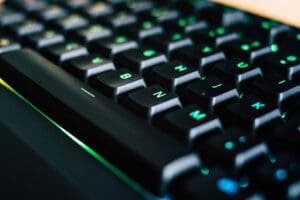 It’s not only children with amblyopia who might benefit from a video game. Doctors felt that similar applications to adults who have the condition might help them too, even if the adults didn’t receive any treatment for their condition when they were younger. In “Tetris Video Game Helps Treat Lazy Eye,” the Director of Research Department of Ophthalmology at McGill University Health Centre explained that the brain is very elastic, meaning that vision loss that occurred early in childhood can be treated once a patient is an adult.

Additionally, learning how to play the video game helped participants with their 3-D depth perception and the sharpness of their vision.

Another study that looked at adults used commercially available video games (an action game that presented gameplay from a first-person perspective and a creative game that was played from a top-down three-dimensional view) in combination with an eyepatch over the participant’s stronger eye.

Both games resulted in a 30 percent increase in visual sharpness and clarity, equivalent to reading 1.5 lines better on an optometrist’s letter chart. By comparison, using only an eyepatch would take 120 hours to lead to a single-line improvement on the chart. Some participants experienced improvements in their vision in under 40 hours of total game time.

“All participants showed a remarkable improvement,” said the lead author of the study.

The study did not answer the question of how long vision would improve after playing a videogame with an eyepatch. The participants who played the creative game first, and then played the action game, continued to do better with their vision.

Researchers guessed that patients who have severe amblyopia will likely take longer, and need more interventions, to show consistent and long-term improvement in their vision. These patients have more room to improve their vision. Players with milder forms of lazy eye might not show as much quantifiable improvement.

For children who might be bullied for wearing an eyepatch, a complex task like playing a video game might help them exercise their lazy eye faster and more effectively. Additionally, the game method will likely be more entertaining and engaging than doing tasks while wearing an eyepatch, which might encourage better results.

Amblyopia: What Is Lazy Eye? (March 2020). American Academy of Ophthalmology.