Do the Effects of LASIK Diminish or Wear Off Over Time?

Home » LASIK Eye Surgery Guide » Do the Effects of LASIK Diminish or Wear Off Over Time?

LASIK has been a common outpatient procedure for decades. Millions of people around the world have their nearsightedness, farsightedness, or astigmatism successfully corrected without spending a lot of money. LASIK also heals quickly, making it one of the best options for people who do not want to wear glasses or contact lenses.

Some people experience changes in their vision 10 or more years after getting LASIK, so they may think the procedure is wearing off or the effects are diminishing over time.

Although LASIK technically does not wear off over time, you may find that your refractive error comes back and changes your vision a little after several years. It is also possible that you could develop a second refractive error as you get older, especially presbyopia or astigmatism.

Studies have found that it is somewhat common for people who have undergone LASIK to need, and pursue, another round at some point in the future.

As long as your cornea is not too thin, you should be able to get another round of LASIK. Your doctor will check for other underlying conditions that could impact your visual acuity, including glaucoma or cataracts, which can also appear as you get older.

It is important to get a full eye exam to check for any underlying conditions before undergoing even your first round of LASIK. Once that is complete and your eye doctor confirms you have enough corneal tissue, you may be a good candidate for a second round of LASIK.

How Long Does LASIK Last?

In order to determine how long LASIK benefits last, researchers measure visual acuity right after surgery, and they take additional measurements of acuity as time passes. If those values change, it seems to suggest that the benefits of surgery can also fade a bit with time.

When LASIK was new, there were many studies just like this performed all across the country. Now that LASIK is considered a standard surgical procedure, there are fewer studies performed. But modern studies do suggest that people who have surgery experience benefits that persist over time.

For example, in a study published in the Middle East African Journal of Ophthalmology, researchers followed people for 10 years after LASIK surgery. They found that 98.5 percent of patients were either satisfied or very satisfied with the results of surgery after 10 years.

Researchers in this study did not measure visual acuity, but they used a questionnaire that addressed that issue along with quality of life. People were asked about troublesome post-surgery symptoms, for example. Since so many were pleased 10 years later, this seems to suggest that the surgery's benefits do not fade with time.

Does It Wear Off or Diminish Over Time?

Although you should not get LASIK if your eyes are still changing prescriptions, there is a chance that refractive errors may continue to change in small ways over time, even if you meet the criteria for LASIK.

Many people also develop additional refractive errors throughout their lives, like astigmatism and presbyopia, which is farsightedness specifically related to getting older.

For some people, this may feel like LASIK is “wearing off” or diminishing. While this is not precisely true, it does mean you might want another round of LASIK. Another LASIK procedure could be possible, but you must meet stricter requirements for this second round. 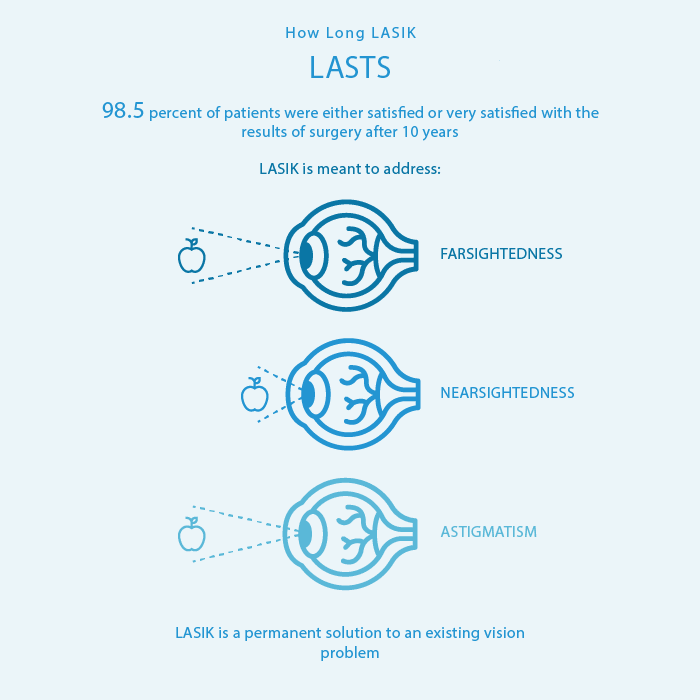 When you ask your optometrist or ophthalmologist about LASIK, you will need to meet certain qualifications. These include:

The FDA also does not recommend that people who have had previous refractive error surgeries pursue LASIK, and this includes having a round of LASIK some years earlier. In part, this is because refractive surgeries change the shape of your cornea by making it thinner, at least in some places. This tissue does not grow back, so you may have thin corneas that cannot withstand another round of LASIK.

If you have sufficient corneal tissue remaining after your first LASIK procedure, and enough time has passed that your eyes are fully healed, you may be able to get a second LASIK operation to correct changed vision. One study reported that about 35 percent of people who had LASIK earlier in life to correct a normal refractive error ended up choosing retreatment after 10 years. This was because their vision had shifted significantly enough that they needed corrective wear like glasses or contact lenses again.

A second study followed people who had either myopia or astigmatism. It found that about 12 years after their first treatment, 10 percent of former patients developed age-related vision changes, including presbyopia, and that led to needing vision correction again.

Few eye doctors will recommend LASIK for presbyopia, as this condition can change your eyesight rapidly. However, more people are pursuing LASIK retreatment about 10 years after their first procedure because their refractive error has come back a little, and they still do not want to use glasses or contact lenses to correct their vision.

There Could Be an Underlying Cause of Poor Eyesight

If your vision is changing and you have had LASIK to correct a refractive error already, there may be another underlying reason that you are having trouble seeing clearly.

For example, both glaucoma and cataracts lead to blurry vision as an early symptom. Getting regular eye exams can help your eye doctor diagnose these conditions and monitor potential problems like small spots or high intraocular pressure that might lead to these conditions. Neither cataracts nor glaucoma can be treated with LASIK or similar vision surgeries.

An optometrist will check your eyes if you are interested in another round of LASIK. Looking for these potential issues will be part of that process, and they will then manage any issues they find.

LASIK is designed to be needed only once, correcting your vision for a specific issue permanently. Although some people may pursue retreatment, their vision is not as bad as it was prior to undergoing their first LASIK procedure, according to the American Refractive Surgery Council (ARSC).

Your eyes may develop additional vision issues, including more serious ones like glaucoma or cataracts, as you get older. Even after having your vision corrected with LASIK, it is important to get regular eye exams. Contact your optometrist or ophthalmologist as soon as possible if your vision quickly changes and you struggle with blurry or poor eyesight.

Most people with standard refractive errors are excellent candidates for LASIK. You are likely to be a good candidate later in life if your refractive error returns or changes as you age. Ask your doctor about your options if your vision changes at some point after LASIK. While the original results of LASIK are unlikely to wear off or diminish over time, you may have developed a new vision issue that could be corrected with another round of LASIK.

When Is LASIK Not for Me? (July 2018). United States Food and Drug Administration (FDA).

If You Had LASIK Surgery Over 15 Years Ago, and Your Vision Is Starting to Get Worse, Can You Have It Done Again? (April 2017). American Academy of Ophthalmology (AAO).

Clinical Outcomes After Topography-Guided LASIK: Comparing Results Based on a New Topography Analysis Algorithm With Those Based on Manifest Refraction. (June 2020). Journal of Cataract & Refractive Surgery.

Outcome of a 10-year Follow-Up of Laser In Situ Laser Keratomileusis for Myopia and Myopic Astigmatism. (December 2014). Taiwan Journal of Ophthalmology.

Twelve-Year Follow-Up of Laser In Situ Keratomileusis for Moderate to High Myopia. (May 2017). BioMed Research International.

Effect of Age on Visual and Refractive Results after LASIK: Mechanical Microkeratome Versus Femtosecond Laser. (March 2019). International Journal of Ophthalmology.

Symptoms and Satisfaction of Patients in the Patient-Reported Outcomes With Laser In Situ Keratomileusis (PROWL) Studies. (January 2017). JAMA Ophthalmology.