Our notions of beauty are socially constructed: Various periods, countries, and subcultures have produced different understandings of the ideal human form. Yet, in a world increasingly connected by the internet, beauty standards have been globalized to an unprecedented extent – with potentially troubling results. From the booming business of skin-lightening products worldwide to the enduring underrepresentation of people of color in the fashion industry, global beauty standards can seem oppressively homogeneous. Is the internet helping to broaden our sense of beauty, or reinforcing Eurocentric standards on a larger scale?

We set out to explore these issues through a specific yet telling question: When different countries search “beautiful woman” or “handsome man” on Google, what images do they see? Because the search engine provides different results based on users’ locations, the images presented reflect each nation’s notions of beauty. 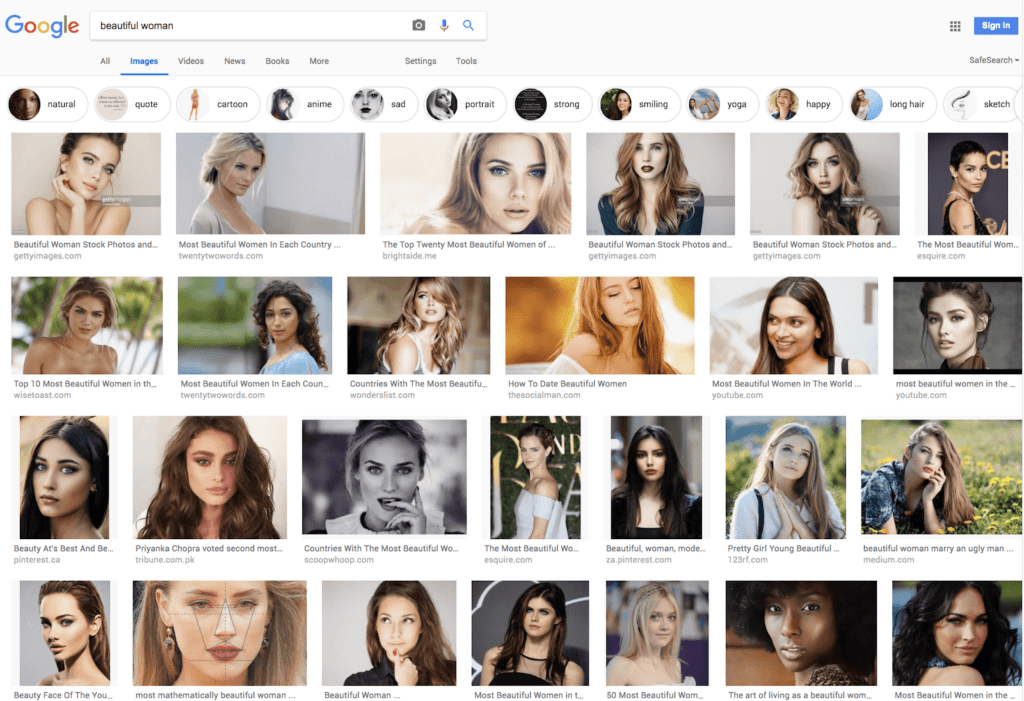 Using a virtual private network (VPN), we mimicked Google searches from nine nations to get their country-specific image results. We then “averaged” the image results for each nation, creating representative composites. We also analyzed and manually categorized the images, exploring recurring themes at a national and global level. Which skin tones, hair colors, and eye colors characterize attractiveness around the world? How do search results for “beautiful” women differ between countries? For a singular look at how each nation’s beauty standards are reflected and reinforced online, keep reading.

Our average faces of “beautiful” women in each country present interesting contrasts and some telling consistencies. Notably, lighter skin tones seemed to dominate – even in countries where people of color represent the majority of the population. In Brazil, where 56 percent of the population identifies as black, “beautiful woman” search results featured a range of light skin tones, as reflected in the country’s composite image. In India, where discrimination against individuals with darker skin has a deep cultural history, the effects of “colorism” were quite evident in our composite image as well. 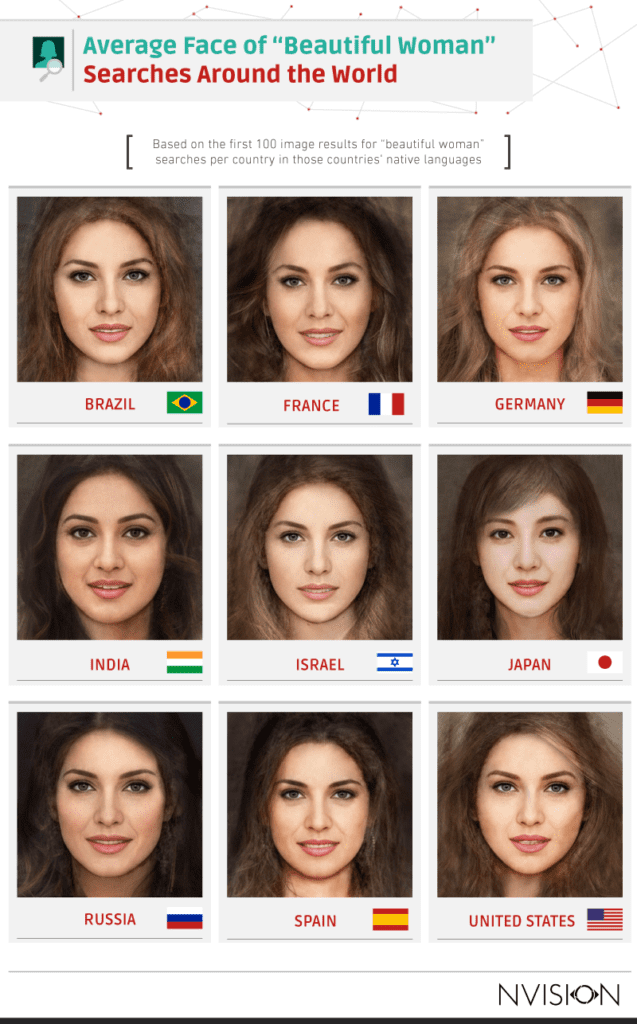 The average face of a “beautiful woman” also seemed strikingly pale in Japan, a country where pigmentation is a source of political controversy. Nissin, a Japanese noodle company, was recently forced to apologize after “whitewashing” images of tennis star Naomi Osaka in an advertisement. Relative to other countries’ images, the average faces in the U.S. and Germany also had a distinct feature: lighter hair. Among American men, the apparent connection between blond hair and beauty may extend even further. One recent study found men are more likely to perceive women as healthier and younger when their hair is digitally altered to be blond.

Each country’s image results for “handsome man” revealed many of the same dynamics visible in “beautiful woman” searches. Indeed, pale skin was the predominant feature of these “handsome man” images, even outside of the U.S. and Europe. This finding resonates with cosmetic purchase patterns in some countries. In India, men are buying skin-lightening products in unprecedented numbers, perhaps in admiration of the fair-skinned stars of Bollywood. 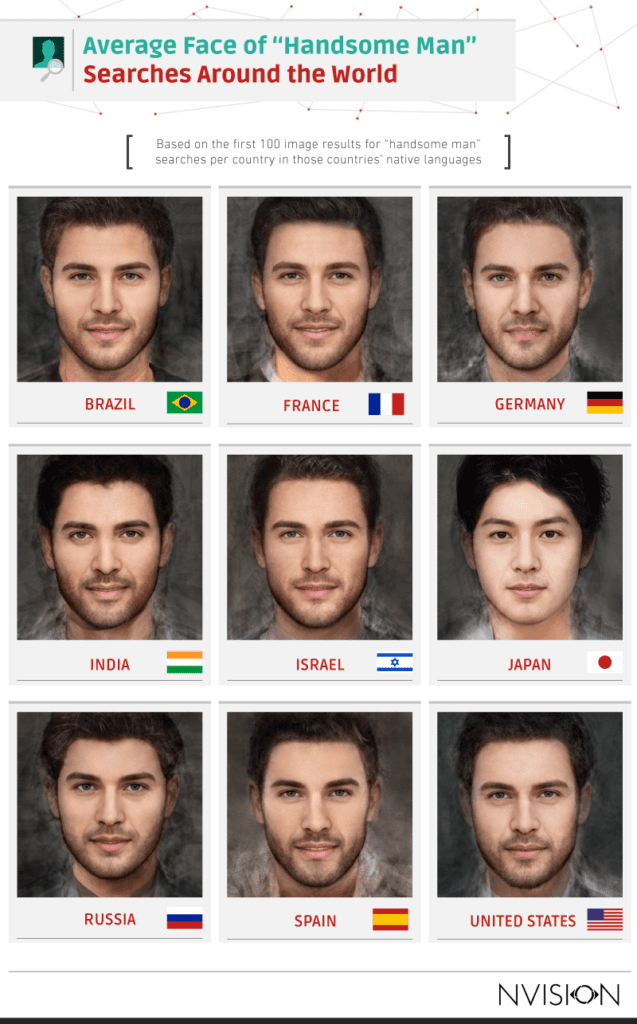 Interestingly, Japan was the only country whose average handsome man lacked significant facial hair. Some research suggests that women tend to find “heavy stubble” to be the most attractive facial hair style, so perhaps it’s no surprise that most of these images showed some growth. Given Japanese culture’s emphasis on personal grooming and hygiene, however, facial hair is the subject of more debate than elsewhere around the world. A ban on beards was actually the subject of a recent lawsuit in Osaka, which pitted city officials against subway operators who wished to go unshaven.

A Preference in Pigment

We determined to explore the skin tones featured in image search results in greater detail, utilizing the Fitzpatrick skin typing system to categorize the individuals featured in these pictures. In Japan, Spain, and Brazil, the majority of individuals featured in “beautiful woman” images had type I skin – the lightest tone of all. In the U.S. images, the most common skin tone was type II. Meanwhile, type III was the most common tone for “beautiful woman” images in France and Russia. 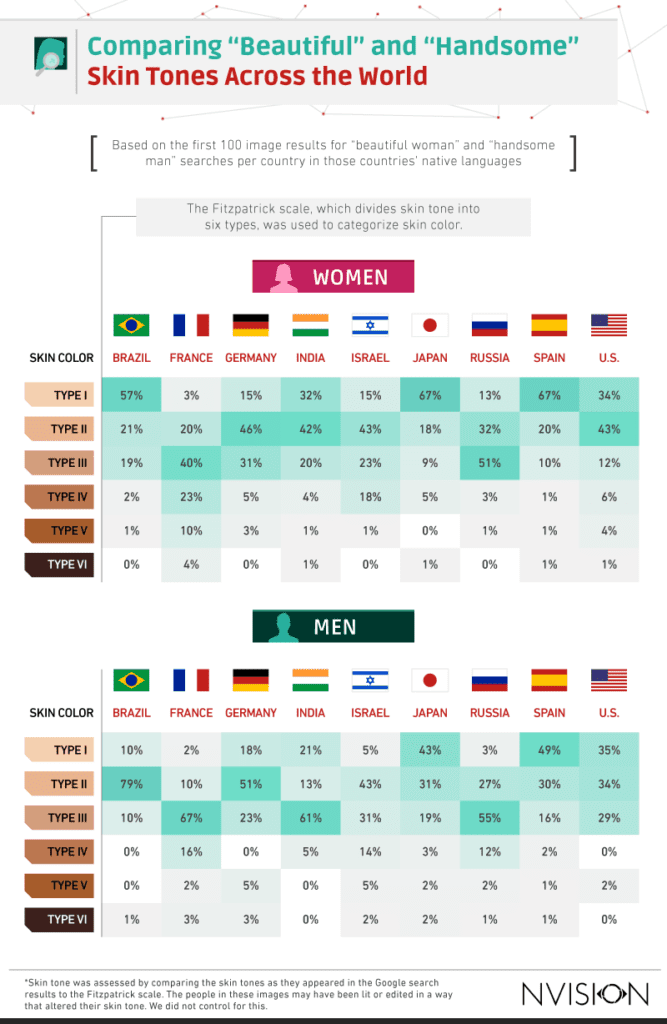 Relative to “beautiful woman” results, “handsome man” pictures featured slightly darker skin tones overall. In France, India, and Russia, for instance, the majority of handsome man pictures featured men with type III skin. But in every country and for images of men and women alike, darker skin tones were quite rare. In every country but France, fewer than 5 percent of “beautiful woman” results featured skin types V or VI. In each nation’s “handsome man” pictures, the two darkest skin types were represented in 5 percent of images or less.

The Eye of the Beholder 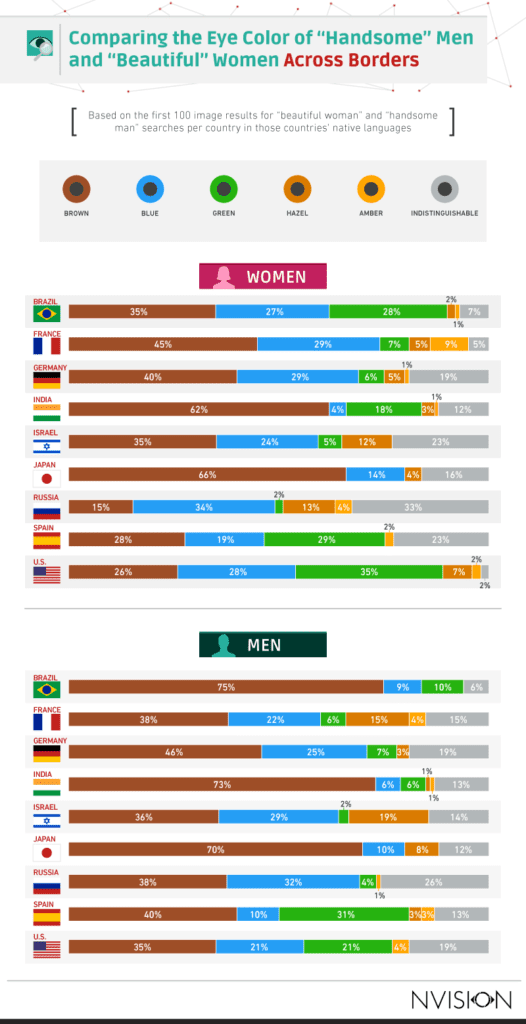 In “handsome man” photos, dark brown eyes were more dominant, especially in some places. In Brazil and India, for example, more than 7 in 10 images featured men with brown eyes. But our data still suggest a connection between male attractiveness and lighter eye colors in some countries. In Spain and the U.S., green eyes were quite common in “handsome man” photos; in Germany, Israel, and Russia, blue eyes frequently appeared.

Brunettes outnumbered blondes in “beautiful woman” photos from each country, but the margin differed significantly by nation. And while blond women were featured most frequently in images in the U.S., there were also more surprising instances of fair hair’s popularity. In Japan, for example, 1 in 5 “beautiful woman” images featured a blonde – a striking testament to the rising popularity of blond hair throughout much of Asia. In every country, red hair accounted for no more than 8 percent of “beautiful woman” images.

In “handsome man” images, dark brown hair was far more dominant, accounting for the majority of photos in Brazil, India, Spain, and the U.S. In Germany and Japan, conversely, black hair was the dominant shade in “handsome man” search results. Interestingly, men with gray hair appeared in a significant percentage of photos in some countries, despite the color’s association with aging. And despite recent claims that redheads are enjoying a moment thanks to icons like Ed Sheeran and Prince Harry, they rarely appeared in “handsome man” photos in any country.

Exposed cleavage and exposed flesh – these attributes well-represent what populates the average person’s mind when they image a sexy woman. The distinction between “beautiful” and “sexy” can seem highly nuanced, posing contrasts between prim appreciation and passionate lust.

However, our findings demonstrated that traditional ideas constituting sexiness often intersect with those of beauty. Around one-third of “beautiful woman” search results for France and Israel featured exposed cleavage, placing these countries at the apex of this ranking. Both nations again topped the list for the greatest percentage of search results yielding bare shoulders. Taking into account that – generally speaking – these countries’ societies do not find bare shoulders particularly provocative, the latter observation may not be intriguing.

But when considered in the context of the overall rankings, both rankings reveal patterns in cultural differences. India sat at the bottom of both of our lists. Only 8 percent of Indian search results for “beautiful woman” featured uncovered upper chests, and 13 percent of them showed uncovered shoulders. Our rankings showed India as consistently more conservative regarding the female form. 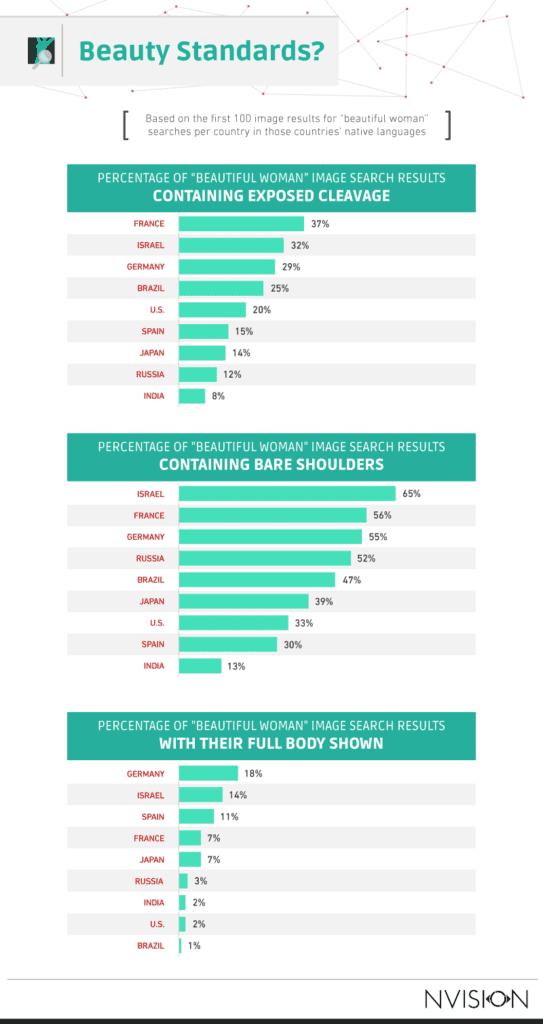 In every country, less than 1 in 5 “beautiful woman” images featured their subject’s whole body. This may demonstrate that as much as societies incorporate sexuality into notions of female beauty, a distinctive line remains – a woman’s facial features rather than her physique primarily define her beauty.

In the previous decades, the perception of beauty demonstrated pervasive and painful inequalities in consideration of the ideal human form. A slender build with a narrow waist and a large bosom was the standard of beauty for many of the past generations. Cheekbones were to be sharp and high, preferably paired with an angular nose.

If you had large, bright green or blue eyes complimenting long and thick golden hair, you would be counted as an ideal beauty. At the core of the world’s definition of beauty, was a youthful look with a light skin tone. Thus, the people of color were deeply underrepresented in the results of search queries “beautiful women” and “handsome men.”

But with an understanding that beauty is cultural, personal and universal, the global community strives to eliminate the implicit biases by adopting more inclusive definitions of beauty. Slowly, society is embracing diversity, graceful aging, and natural attractiveness as vital aspects of prettiness.

Beauty magazines now feature women of different skin tones, from Fitzpatrick I-VI. Plus-sized women with bald heads and vitiligo now make it to the global stage of beauty. Even those with gray hair and wrinkles are still regarded as attractive.

The gates of elegance that once seemed terribly narrow are now opening wide and everyone is allowed in with their unique display of beauty.

Remarkably, the evolution of plastic surgery and other anti-aging practices like the use of fillers and Botox contribute to the unprecedented rise of beauty queens.

Supposing you entered the phrase “beautiful woman” into a search tab now, the results would be more diverse and inclusive compared to a decade ago. It’s no longer unusual to spot a woman of color or a lady wearing hijab on the cover of the world’s leading beauty magazines.

It’s hardly surprising that 2020 made for a different year for every industry across the globe. No part of human existence was left untouched by the global pandemic of COVID-19.

A shift in beauty searches was inevitable. According to Google, most beauty-related searches focused on self-care and home beauty therapies. With salons and barbershops closed for a long period of time – some of them didn’t survive, either – people resorted to cutting or dying their hair at home, giving an entirely new perception of beauty. Instead of sophisticated hairstyles, easy-to-maintain designs like bob were the choice of many.

Apart from hairstyles, a rise in the searches of skincare products and ingredients was notable. Consumers tried several new recipes of DIY skin essentials as a way of enhancing and maintaining beauty during the pandemic.

We searched for “beautiful woman” and “handsome man,” selected “images,” and documented characteristics of the first 100 images to better understand the demographics making up these searches. After exploring the United States we decided to see how these trends change around the globe. To do this we used a virtual private network (VPN) to access the internet in various countries to “trick” search engines into thinking we were performing these searches from within each of the countries, collecting the images revealed per term.

In specific cases, comparable terms were used to better fit the language of that country.

Searches were performed January of 2019.

Images were categorized manually for a series of characteristics and visual cues.

Group images and black and white images were excluded. In some cases, eye color was indistinguishable and categorized as such. For skin tone, the Fitzpatrick scale was used to help simplify classification by selecting the tone closest to the shade in the Fitzpatrick scale.

Countries were selected by first looking at the top 10 languages spoken around the world. In some cases, top languages came from similar regions and were removed from the list (e.g., Hindi, Punjabi, and Bengali). In addition, some countries block Google or were not accessible via VPN and were replaced by countries we thought would be interesting to compare. When doing so, we attempted to select a variety of countries from across the globe, each home to a different native language.

If you care about the impact of beauty standards on men and women across the globe, we invite you to spread the word about this project. And if you’re interested in sharing our images and information on your own site or social media, all the better. We do have two simple requests, however. First, please use our project only for noncommercial purposes. Second, link back to this page to cite your source when sharing. Thanks in advance: Your cooperation helps us continue our work!