Congenital cataracts are present in newborns, clouding the lens of one or both eyes and causing early problems with vision.

Some viruses and genetic conditions increase the risk of your infant having cataracts, which can lead to trouble focusing on their surroundings, ignoring some stimuli, or rapid eye movements to focus on objects in front of them. Staying healthy during pregnancy is the only way to reduce congenital cataract risk, but you cannot fully prevent this problem.

Fortunately, treatment is safe and effective. Your pediatric ophthalmologist will determine if your child’s congenital cataracts need surgery.

What Are Congenital Cataracts? 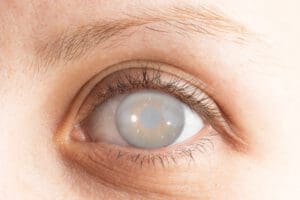 Cataracts that are congenital are present at birth, clouding the normally clear lens of the infant’s eye.

It may be difficult to know for sure if your child has cataracts. Newborns and young babies cannot see well. They are typically a little hyperopic, or farsighted. They do not have good color sense and have trouble focusing on objects. However, a healthy infant can see movement and will follow people or objects around a room or outside.

Hyperopia will increase some in the first weeks or months, and then decrease as vision evens out. If your child does not follow motions, appears to ignore part of the world around them, or develops rapid eye movements to process images, they may have a cataract.

The main types of cataracts that may be present at birth are:

With anterior polar cataract, the lens capsule (the usually clear membrane around the eye’s lens) becomes cloudy. There may be a tiny nodule extending into the front part of the eye. The condition can be genetic, and it can affect one eye or both eyes. The good news is the cataract does not require treatment because it doesn’t affect vision.

Posterior polar cataract develops on the back of the lens capsule. Sometimes, the inherited condition can develop into a major, vision-threatening cataract.

A nuclear cataract creates cloudiness, or dots, in the middle area of the eye’s lens. Many infants born with this condition require urgent surgical treatment.

Cerulean cataract causes some areas of the lens to turn bluish or whitish. It mostly affects both eyes and may develop into more serious vision problems.

If your baby is born with congenital cataracts, they may look different than adulthood cataracts, which begin in late middle age and progress over decades.

Symptoms of congenital cataracts can be hard to spot, although your obstetrics team should be able to identify some signs. These include:

The only way to know if your child has congenital cataracts is to have a pediatric ophthalmologist evaluate your baby’s eyes. If the underlying cause is a genetic disorder, working with an ophthalmologist who specializes in these conditions can improve outcomes. Understanding if a genetic disorder caused congenital cataracts may require blood tests.

Typically, the underlying cause of congenital cataracts is unknown. The baby is born with them, and parents work with their pediatric ophthalmologist to treat the condition as much as possible.

While there is no known direct cause of congenital cataracts, some conditions and infections increase your baby’s risk of developing cataracts. These conditions include:

Can You Prevent Congenital Cataracts?

Since congenital cataracts are present at birth, there is nothing you can do to prevent them. Even if your child has a condition that puts them at higher risk of congenital cataracts, you cannot predict for sure if they will develop them or not. Work with your OBGYN to keep yourself as healthy as possible during pregnancy, and this can reduce some risks like viruses. 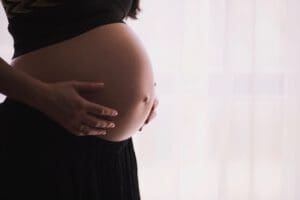 If your child does get congenital cataracts, removing them involves a safe, effective procedure. The diagnostic process is not invasive. Working with a pediatric ophthalmologist ensures your child will have the best possible vision.

After cataract surgery, there is some risk that your child could develop cataracts again, later in life. This is typically associated with genetic disorders, which will require treatment from a pediatrician and other specialists throughout life. Your pediatric ophthalmologist will generally recommend blood tests to determine if a genetic disorder is the cause of the issue.

It is important to get treatment for your child as soon as possible. Not only can your child struggle with “lazy eye” and blurry vision from untreated cataracts, they may also:

An eye doctor/surgeon with experience in treating children’s eye conditions is the best specialist for congenital cataracts. Professionally referred to as a pediatric ophthalmologist, the doctor will examine your child’s eye and determine if any treatment is necessary.

If the condition doesn’t pose any significant risk to the child’s vision, surgery won’t be necessary. Some minor cataracts only require ongoing monitoring.

Immediate surgical removal of the lens and its replacement is usually required for infants with progressive cataracts. Even when major damage is envisaged, surgery is only a good option if there’s reason to believe it can reverse or halt the damage.

Delayed treatment allows the cataract to cause irreversible harm to the baby’s visual health. It could adversely impact their cognitive development and learning. In some poorly resolved cataract cases, the child suffers permanent vision loss. Any operation should be performed within 12 months after birth

Most ophthalmologists don’t offer intraocular lens (IOL) implants to kids this young. Instead, doctors may prescribe contact lenses to correct your child’s vision after cataract surgery. The general process for the eye operation, which lasts one to two hours, is:

The purpose of the contact lens is to enable the child to see with the treated eye. For kids under 12 months old, IOLs are avoided because they can cause future eye complications like shortsightedness.

Their natural eye lenses and vision power aren’t well developed at this age, unlike in older children or adults. Many infants that get these lens implants prematurely end up requiring additional eye surgeries.

After the operation, your child will be given antibiotics to fight off any infection in the treated eye as it heals. Also, they'll need to use steroid eye drops to control swelling, which happens a lot in kids after cataract surgery.