Home » Diagnosed With Glaucoma? What You Should Know » Sleep Apnea & Glaucoma Risks: What’s the Connection?

It was long believed that sleep apnea was a factor in glaucoma because of how it would raise pressure in the body. Now, it is thought that sleep apnea reduces the oxygen content in the blood, damaging the optic nerve and increasing pressure that way. (Learn More)

Ophthalmologists recommend that any diagnosis for glaucoma include a screening for sleep apnea. (Learn More) 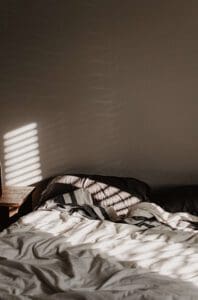 To better understand the connection, researchers in Japan gave sleep apnea sufferers special contact lenses to wear as they slept. The lenses recorded pressure changes inside the eye (intraocular pressure).

The theory is that when glaucoma damages the optic nerve, it is because of how the condition causes an increase in the eye’s intraocular pressure. For people with obstructive sleep apnea, intraocular pressure would also increase. Previous research had found that sleep apnea causes an increase of pressure in the chest due to the way it limits breathing.

However, other researchers looking at glaucoma and sleep apnea in the same way discovered that intraocular pressure dropped during episodes of sleep apnea, leading them to believe that some forms of glaucoma may develop because patients do not have enough oxygen in their blood. This is because of the disruption to their breathing.

Patients with obstructive sleep apnea are 10 times more likely to also have glaucoma than people who do not have a sleep apnea problem.

Under normal circumstances, pressure in the chest (intrathoracic pressure) will rise if people stop breathing for an extended period of time. But the researchers were surprised to discover that their test subjects stopped inhaling, not exhaling, when their sleep apnea closed their airways.

The subjects also experienced hypoxia, a medical condition where tissues in the body are not getting enough oxygen. Because of the reduced breathing rate, blood oxygen saturation levels also went down, which might trigger the optic nerve damage that results in glaucoma.

The results of the study showed that the optic nerve damage was due to hypoxia, not the expected spike in eye pressure.

Those findings were backed up by researchers writing in the Oman Journal of Ophthalmology, who also concurred that the connection between glaucoma and sleep apnea was more due to hypoxia than it was intrathoracic pressure.

What Is Sleep Apnea? 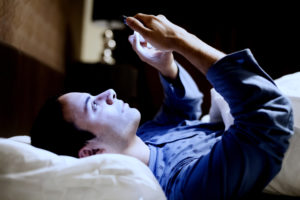 Sleep apnea is a sleep disorder where a person’s breathing repeatedly stops and starts over the course of a night. Snoring is one result of sleep apnea. People who sleep for a full eight hours but still wake up tired and with a headache might be suffering from it.

While sleep apnea  is very common, it can also be quite serious.

There are three different kinds of sleep apnea. One of them, obstructive sleep disorder, is the most common. It is caused by the throat muscles relaxing during sleep, collapsing to the point of blocking the airway.

This happens often enough during the sleep cycle that blood oxygen levels go down. The break in breathing (called the apnea) can be over in a few seconds, or it might take minutes. The brain sends signals to the body that it desperately needs to start breathing again, which is why some people with sleep apnea wake up gasping for air.

A doctor speaking to Optometry Times explained that sleep apnea “is a cycle that never really stops.” Even after the gasp of breath, the throat muscles will again collapse once the person goes back to sleep.

Obstructive sleep apnea is commonly found among overweight or obese men. It develops more in men than in women, and African American people are more likely to suffer from it than those of other racial backgrounds. Other factors include age, lifestyle habits (like smoking), and body mass. People with a neck circumference of over 19 inches are more likely to suffer from sleep apnea.

People who snore will almost certainly have obstructive sleep apnea, although not all snoring is the result of sleep apnea.

Untreated obstructive sleep apnea can lead to a number of health problems, like stroke, high blood pressure, and heart problems, including a heart attack. But another concern to add to that list is glaucoma. 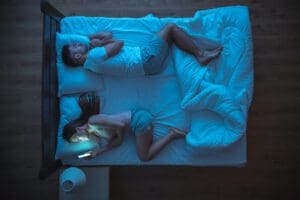 Testing for sleep apnea is very expensive and disruptive. It requires an overnight stay and being physically connected to a number of testing machines.

Nonetheless, there are treatment options for sleep apnea, which may help with the treatment of glaucoma as well. Some lifestyle changes include losing weight, stopping smoking, and cutting down on alcohol and sleeping medications. Some patients might benefit from sleeping on their sides.

Dental appliances can prop the lower jaw forward, preventing the airway from collapsing. One of the most common forms of treatment for sleep apnea is a continuous positive airway pressure, or CPAP therapy. Patients sleep with a mask connected to a machine that provides a continuous flow of air, forcing the airways open during the night.

CPAP machines are effective, but not very popular. They are loud, uncomfortable, and difficult to carry for travel, so less than half the people diagnosed with sleep apnea use them.

However, for people at risk for glaucoma, a CPAP machine may be vital in keeping the blood oxygenated enough so the optic nerve does not become damaged. It has been observed in patients with obstructive sleep apnea that CPAP machines cause some side effects, such as dry eye and bacterial conjunctivitis (likely due to air leakage around the mask).

Ophthalmologists recommend that questions regarding sleep apnea should be included in an eye care provider’s intake form. Many patients will not volunteer this information themselves because they likely do not know of the connection between glaucoma and their obstructive sleep apnea. When diagnosing glaucoma, doctors should also screen for sleep apnea.

Many African Americans May Have Undiagnosed Sleep Apnea. (October 2018). Reuters.

Why Apnea Patients Are Prone to Suffer From Glaucoma. (July 2016). Science Daily.

Glaucoma and Its Association With Obstructive Sleep Apnea: A Narrative Review. (Sept­-Dec 2016). Oman Journal of Ophthalmology.

Ophthalmic Diseases in Patients With Obstructive Sleep Apnea. (August 2016). The Journal of the American Osteopathic Association.