Several studies have linked smoking and nicotine to cataracts, including developing cataracts earlier in life and losing vision faster. (Learn More) Chemicals in nicotine and cigarettes damage all major body systems, including the eyes, so you are more likely to develop more serious cataracts and require surgery at a younger age. (Learn More)

Vaping and e-cigarettes also cause serious health problems. Although they have not been directly linked to cataract development, consuming tobacco in any form increases your risk of cataracts, and vaping could make this problem worse. (Learn More)

Quitting all tobacco products reduces your risk of cataract development. Your eyes can heal, although this can be a very slow process. (Learn More) 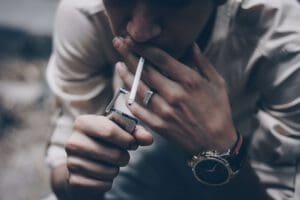 Smoking cigarettes is the leading cause of preventable disease and death in the United States. Cigarettes, vape pens and e-cigarettes, pipes, and other forms of smoking lead to serious health problems in every major system in your body, including your lungs, your heart, your teeth, and even your eyes.

Two serious eye conditions are linked to smoking: age-related macular degeneration (AMD) and cataracts. Although there are treatments for cataracts, once you begin to develop this problem, there is not a way to stop it.

Eventually, your vision will become so cloudy that you cannot perform daily tasks. Your eye doctor will then recommend removing your damaged natural lens and replacing it with an artificial lens. This clears up your vision but will not fully restore your original, pre-cataract eyesight.

The best way to slow down the development or progression of cataracts is to quit smoking or using other tobacco products. People who smoke are between two and three times more likely to develop cataracts compared to those who do not smoke.

Why Smoking & Cataracts Are Connected

More than half of American adults have cataract surgery by the time they reach 80 years old. People typically begin to develop cataracts around age 60. This condition is caused by damaged proteins in the lens of your eye, which begin to clump together and form white spots, dark areas, or off-color areas that gradually affect your vision.

Smoking cigarettes is not the only link between tobacco and cataracts. Other harmful chemicals associated with ingesting tobacco include:

Several studies show the impacts of smoking on cataracts.

Medical researchers believe that smoking alters proteins and cells in your lens through oxidation. Cigarettes also contain heavy metals and dangerous chemicals like cadmium, which also damage delicate parts of your eye like the lens.

Vaping Could Also Lead to Cataracts

While cigarettes are the primary way most people abuse tobacco, vaping and e-cigarettes are becoming increasingly popular. Although vaping is still relatively new, it has already caused serious damage to people who choose this method over cigarette smoking. About 1,000 new cases of lung disease and 18 deaths have been associated with specific oils used in vaping products.

Vaping’s impact on eyesight is not well understood yet, but preliminary studies suggest it increases dry eye. This can increase your risk of inflammation and infections. Inflammation and oxidative stress are associated with an increased risk of developing cataracts later in life.

Quitting Is the Best Way to Reduce Your Cataract Risk

If you smoke, the best way to lower your cataract risk is to quit. Studies have shown that the eyes can repair some damage from smoking and tobacco consumption slowly over time. People who quit smoking and remain abstinent for 25 years have a 20 percent lower chance of developing cataracts compared to current smokers.

To reduce smoking and vaping of tobacco products, the U.S. Food and Drug Administration (FDA) has proposed a rule that would require some tobacco product manufacturers to include images on packaging of lesser-known health risks, including cataracts and AMD.

Ask your optometrist or ophthalmologist about your cataract risk if you are a current or former smoker. Regular eye exams will help your eye doctor see the beginning of this condition before it impacts your sight, so they can tell you about the best treatment method for you.

Smoking Cessation and the Risk of Cataract. (March 2014). Journal of the American Medical Association (JAMA), Ophthalmology.

How Smoking Harms Your Vision. (May 2010). Everyday Health.